Maybe if more plays were produced on Broadway like Rinne Groff’s Orange Lemon Egg Canary, we wouldn’t be lamenting the death of Broadway every season. Groff writes for the theater – there’s no don’t about it. OLEC may be her most theatrical play to date because it uses magic as a metaphor for modern romance. Magic tricks pump through the veins of this play as dose belief in the supernatural, making for one heck of a time in the theater. At the center of it all is Steve Cuiffo as Great, a magician, and his new lover (girlfriend?), Trilby, a waitress who wants to learn his tricks. Cuiffo is great as Great as is Emily Swallow as the ghost of Henrietta, Great’s grandfather’s former assistant. And Andromache Chalfant is becoming the Ming Cho Lee of off Broadway; his sets are envirnoments and add a depth to every show that enhabits one of them. Long time Rinne Groff colaborator, Micheal Sexton, directs this show with a skill that should make every playwright be bidding for his talents. Like so many shows Off and Off-Off Broadway, it’s seems yet again something great in the theater way too quickly disappears. 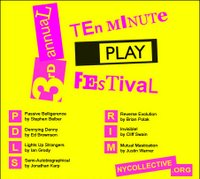 Wow, I think I have a new favorite genre of theater: the ten-minute play. There is something very liberating in knowing that the play you are watching is not going to ramble endlessly or for at least an indeterminate amount of time. Knowing that the piece you are watching will run only ten minutes (give or take a few) allows you to sit back, relax and enjoy, free from the hostage-like feeling I’ve had at some evenings at the theater. Seven ten-minute plays are being performed as part of New York Collective for the Arts’ Third Annual Ten-Minute Play Festival. Most of the plays are comical, some are better written then others, and all are well directed and for the most part well acted and over all make for an entertaining program. Standouts include Semi-Autobiographical by Jonathan Karp, Invisible by Cliff Swain and Stephen Belber’s very funny Passive Belligerence. It’s a shame today was the final performance because more people should be able to enjoy this collection.

For More Info: New York Collective for the Arts
Posted by Ludlow Lad at 5:28 PM No comments:

Fringe came early this year, by way of Sanctuary Playwrights Theatre’s production of Food for Fish by Adam Szymkowicz. The play is a contemporary update of Chekhov’s Three Sisters that takes place in Manhattan and has the famous siblings yearning to go to New Jersey. The sisters are now the agoraphobic, eldest Barbara (played by a very funny Luis Moreno) the perpetually dating middle sister, Alice, who is a scientist searching for the gene that causes love and romance, and the youngest sister and journalist, Sylvia. It’s still a year since their father has died, only they have yet to bury him and the odor is becoming a problem. Szymkowicz’ play is funny and promising and Ana Perea (as Alice) is wonderful, yet the play is not served well at all by this production. Alexis Poledouris’ clumsy staging, Gina Scherr’ bizarre lighting and some not very good performances seem like symptoms of a show that was not very thought out (typical Fringe traits) and this play deserves better.

For info: http://www.sanctuarytheatre.org/
Posted by Ludlow Lad at 10:56 PM No comments:

Michael Riedel’s column today is mostly about Sandra Bernhard’s awful off-stage behavior during the run the run of her recently departed show, Everything Bad & Beautiful at the Daryl Roth Theatre. [You can read what I thought of the show here .]

She also berated production assistants, telling one, "I'm going to hand you your ass on a plate, and you're going to have to eat it."

You can read the entire column here:
SURLY SANDRA'S TANTRUMS LEAD THEATER TO HOLD RITUAL CLEANSING
Posted by Ludlow Lad at 7:08 AM No comments:

HERE's festival of work by emerging artists in a living room environment will happen July 28-August 30, 2006 . Paper Magazine encourages audiences to “ Crack a cool one, watch a sharp mix of new stuff, while feeling like you're still at home.” During HERE's renovations, The American Living Room will be presented at 3 Legged Dog's new space on Greenwich St.

Some shows that sound interesting are:

SHADOW PLAY – July 28 & 29 (Friday & Saturday)
Directed & choreographed by Ariane Anthony, with film by Jennifer Todd Reeves
Shadow Play reflects on the poignant interplay of perception and memory as dramatic events take place and characters from a silent movie dance in front of a film projection.

LOOKING FOR LIMBO – July 30 & 31 (Sunday & Monday)
Written by Melaena Cadiz, Joseph Keckler & Erin Markey
As the Vatican eliminates Limbo from Catholic Lore, the spirit of one giant unbaptized baby arrives at the gates of the nether-region, greeted by a colorful and confused crew of fleeing citizens. Together they embark on a soul-searching musical journey. Where do you go when you've been evicted from oblivion?

THE DOROTHY BUILDING - August 7 & 8 (Monday & Tuesday)
Directed & designed by Michael Scott-Price, written by Trav S.D.
This tale of a boarding house where the guests are all identical women named Dorothy is an absurdist-mask piece that delves into a dream-like realm that is both unsettling and lightly humorous.

LEE/GENDARY - August 12 (Saturday)
Written by Soomi Kim & Derek Nguyen
This multidisciplinary performance was inspired by the life of Bruce Lee. Soomi Kim felt compelled to inhabit this role after learning Lee was given a girl's name as a disguise from evil spirits. This unique look at Lee's drive to defy definition blends text, live music and a hybrid of martial arts, dance and acrobatics.

A Full list of events are here: http://www.here.org/see/now/talr/
Posted by Ludlow Lad at 6:36 AM No comments: 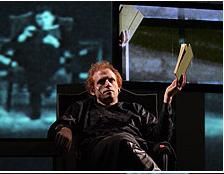 New photos of the Wooster Group's production of Hamlet have turned up on line. It's apparantly "inspired by Richard Burton's 1964 film version of Hamlet as well as other famous productions of the play."

This small survey of documentation and footage, at Anthology Film Archives, by some of the most influential theater-makers of the 60s and 70s is neither an academic attempt to summarize an era, nor an authoritative account of the scene. Rather, it is a collection of some astounding images and moments from a selection of revered masters.

For Info: Anthology Film Archives
Posted by Ludlow Lad at 7:56 AM No comments: