Here are a few shows that are begining in February that I think look interesting:

The Other Here – a new work by Big Dance Group; directed by Paul Lazar and choreographed by Annie-B Parson at The Japan Society; February 8th – 11th; www.bigdancetheater.org

The Spanish Tragedie - The Queens Players present the not-often-revived revenge play by Thomas Kyd at both The Jackson Avenue Theatre in Long Island City and the Bridge Theater at Shetler Studios; Febrauary 8th - 25th; www.thequeensplayers.com [adjust your volume first!]

Hamlet – The Wooster Group's take on Hamlet as filtered through the 1964 Richard Burton production debuts at St. Ann's Warehouse; February 27th – March 25th; www.thewoostergroup.org
Posted by Ludlow Lad at 8:52 AM No comments:

Since we still have a few weeks before we get to see what the Wooster Group will do with this play, here's Cat Head Theatre's HAMLET...
Posted by Ludlow Lad at 7:52 PM No comments:

Posted by Ludlow Lad at 9:24 AM No comments:

If anyone needs hard evidence as to how dark the world has become in the past, say, six or so years, need only to look at the production history of Big Art Group. Their previous work, specifically their Real-Time Film trilogy, maintained an air of playfulness even when the plots were the material of B-movie slasher films. Flash forward to 2007 and Dead Set #3, the newest work of Caden Manson, and there is a definite shift and things have taken a threatening turn. Dealing with issues of cannibalism and war, Dead Set #3, explores the personal and public sides of violence exposing the audience to an extreme visual and aural and practically physical assault as one is likely to see on stage this year. Beginning with a montage of lights and sound, moving into a collage of dialogue from numerous films (including The Shining, Night of the Living Dead and the remake of The Hills Have Eyes) and ultimately ending in the meeting of two men who meet on-line for an act of consensual cannibalism. Despite some technical quibbles – such as some misguided lighting - this is a work one is not soon likely to forget.

For Info: www.bigartgroup.com
Posted by Ludlow Lad at 11:56 PM No comments: 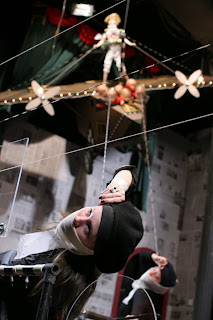 Like clockwork, in the middle of January each year, arrives a new production by Richard Foreman. Wake Up Mr. Sleepy! Your Unconscious Mind is Dead! is the second of Foreman’s film/performance projects. A film consisting of various tableaus plays behind what is a more typical Foreman-esque stage piece. I’m not sure how I feel about the film element of Foreman's new projects, but I have the feeling if there was no film in next year’s piece that I would miss it. This year's piece seems quieter than previous pieces, with stretches of silence. The recognizable style of previous Foreman sets uses more of the Ontological's stage than past productions, including a cemetery-like section with flowers in black vases over which flies a large brown airplane piloted by six baby dolls. Wake Up Mr. Sleepy! seems to be about technology and unforeseen dangers of “progress” but resist over-analysis and enjoy the ride.

For Tickets & Info: www.ontological.com
Posted by Ludlow Lad at 7:25 AM No comments: 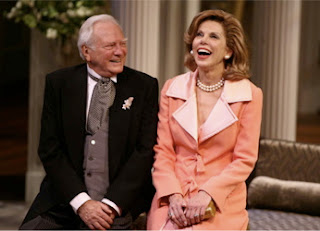 I don't understand why Paul Rudnick was bashed so harshly for writing a farce on gay marriage. Many of the NY critics berated him writing one-liners that they said didn't amount to a play. I'm not sure if said critics actually know what a farce is, but Regrets Only is a first class farce. The fact that it manages to be as poignant as it does should be to its credit, not its detriment. I can't recall Neil Simon being held to these same standards. Christine Baranski, looking beautiful in William Ivey Long's gorgeous costumes, has the pristine timing to land every joke Rudnick supplies. Jackie Hoffman is flawless as the only white, Jewish maid in New York City. And Sian Phillips, as Baranski's mother, almost steals the show at the beginning of Act Two. I think the New York critics need to start reviewing the shows they see not the shows they think they should be seeing.

For tickets and info: www.mtc-nyc.org
Posted by Ludlow Lad at 11:57 PM No comments: 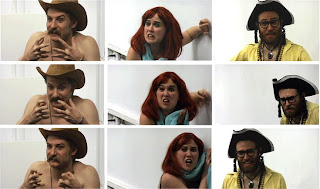 Nature Theater of Oklahoma's new work in progress, No Dice, begins performances tonight. There is an article by Brian Parks about the company in the current issue of the Village Voice.

Katharsis Theater Company's The Polish Play, “devised” and directed by Henry Wishcamper, is part Ubu Roi, part Macbeth, and that's the problem – well that's one of the problems. Alfred Jarry's Ubu is partially based on Macbeth, so the fusing of the two is already redundant. The execution of of The Polish Play is the remainder of the problem. The performance I saw was obviously rough, but the inherent problems of the production can't be overlooked. Most of what is intended to be humorous, just isn't funny. The large set pieces are not easily maneuvered around Walkerspace's narrow playing area. And while there are some creative ideas they are few an far between and even those are executed poorly. The live sound effects are good and actually wind up stealing focus. Happily, things were proceeding briskly, however after about an hour the announcement of an Intermission, after Act III, Scene 4, came as a huge surprise/disappointment. I didn't return for the second half.

For Info & Tickets: www.katharsistheater.org
Posted by Ludlow Lad at 9:42 PM No comments: 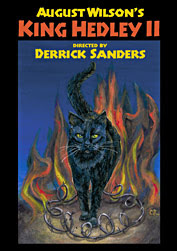 The best theater bargain in New York City has to be Signature Theater Company's $15 ticket in celebration of Signature's 15th Anniversary. This great theater initiative is sponsored by Time Warner.

Tickets for the final production in the August Wilson series, King Hedley II, go on sale on Monday, January 22nd at 1pm. So visit the site and pick your dates now and get ready to buy on the day tickets go on sale. Don't wait because tickets go fast.

For tickets and info: www.signaturetheatre.org
Posted by Ludlow Lad at 7:07 PM No comments: 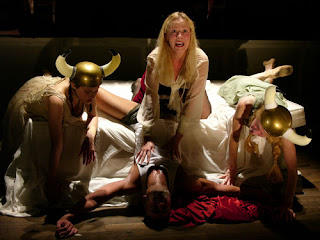 You Belong To Me: The Fifth Installment of the Death of Nations Project is a three part theater piece taking place in the US south on the last day of the American Civil War, in Germany on the last day of World War II, and in a present-day US military hospital in Germany. This was my first encounter with the Death of Nations Project and The International WOW Company for that matter. Maybe they are an acquired taste – by the third part I was really enjoying You Belong To Me, but it was really rough going. Act I – Belongings – has none of the humor of the final two Acts, and it's sorely missed. The style of Act One is part Robert Wilson, part Reza Abdoh, part Heiner Müller, and at times it crosses over into avant-garde parody. But things pick up considerably after the first intermission. Act Two is very funny (on purpose) and Wagnarian in scope. And Act Three is just trippy, but enjoyably so. So if you are planning to see You Belong To Me – don't leave at the first intermission – or better yet, just second and third act it.

Sarah Ruhl's The Clean House is a great play. It should be quickly entered into the cannon or great American dramatic literature. It's funny and smart and moving. It filled with brilliant visuals and juicy bits of wisdom. The Clean House concerns Matilde, a maid from Brazil who doesn't like to clean. She is on a quest to find “the perfect joke” and cleaning makes her depressed. Her employer, Lane, a successful doctor is at her wits end – so in steps Virginia, Lane's sister to offer to clean Lane's house on Matilde's behalf. It's a terrific premise, dealing with class, privilege, work, finding one's place in life, and about a dozen other ideas. So it's sad to report that the expensive production currently at the Mitzi E. Newhouse Theater at Lincoln Center only rises to the occasion of this wonderful script in Act Two, when the top-notch cast really finds its stride. Jill Clayburgh's portrayal of Virginia seemed a little too much of cartoon but Blair Brown's Lane is much more sturdy and really blooms in Act Two. As Matilde, Vanessa Aspillaga is very good, finding the right note pretty much throughout. The Clean House is worth a visit, but I don't think this the perfect production that this play deserves.

For Tickets & Info: www.lct.org
Posted by Ludlow Lad at 11:48 PM No comments: 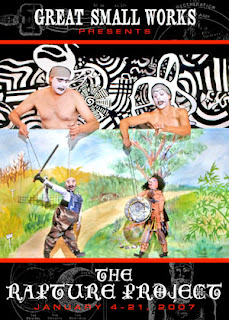 Great Small Works' The Rapture Project is inspired by classic Sicilian puppet theater’s Orlando Furioso cycles, which performed the epic clash of Christians and Muslims in the 1800’s, proving in explicit marionette style, that everything old is indeed new again. Despite an occasional sloppy presentation and sometimes confused narration, The Rapture Project is a riveting political polemic with a cast of characters that include fundamentalist Christians giving a tour of the Grand Canyon, punk Muslims in Buffalo, and American CEO supplying faulty armor to the US soldiers in Iraq and the ghost of Susan Sontag. Along the way to the inevitable blood-bath of a climax is a terrific sound-scape, songs and music composed and performed by Jessica Lurie. And the visual of the Anti-Christ walking down Jay Street is my favorite theater image in a long time!

For Tickets & Info: www.here.org
Posted by Ludlow Lad at 11:23 PM No comments:

It's The End Of The World (As We Know It)

OK, maybe that's an exaggeration...but it is another reason to avoid Broadway if possible. Cara Joy David's article in The New York Times about the instances of eating during Broadway shows made me depressed. I gave up on the movies long ago (pass the nachos) – but et tu Broadway? And to hear that the Nederlander's are encouraging it just underscores the fact that Broadway is a real estate business, not an artistic venture. In a larger sense, this is just a symptom of charging higher and higher prices on Broadway and having the audience paying these inflated prices dictate the rules.

Some of Off-Broadway's leading lights offer up resolutions for 2007 to Alexis Soloski.

Full Article: www.villagevoice.com
Posted by Ludlow Lad at 10:56 AM No comments:

Happy New Year!
It looks like NYC Theater is off to a good start in January. Here are a few of the shows I'm most looking forward to:

Posted by Ludlow Lad at 7:20 PM No comments: