As the performances at the Soho Think Tank's Ice Factory are workshops, I'm going to give The Lacy Project constructive criticism: realize work works in your piece and run with it and realize what doesn't and toss it. The when the high points happen in The Lacy Project they are GREAT! A “Raggedy Ann” type doll describing playing with her male anatomy (as performed by Alexis McGuinness) is shockingly hilarious. Actress Molly Ward is brilliant in every moment she is on stage playing a spoiled white-wrapper junkie. When she's not in a scene you want her back. The premise of Alena Smith's play is also to be placed in the “what works” column. Lacy's mom is a famous photographer who has taken her photo (wearing a red ribbon) on her birthday every year. The play takes place on her 22nd birthday as she prepares for her mother's arrival. I think the biggest problem with the production is Susanna Gellert's direction. Aside from a nicely staged musical number, much of the scenes and the transitions from reality to fantasy either drag or just don't ever come together. The play itself could use some trimming and the resolution between Lacy and her roommate seems forced at best. But there is much to like about The Lacy Project – I hope it comes together eventually.

For Info: www.sohothinktank.org/icefactory
Posted by Ludlow Lad at 6:16 PM 1 comment:

What's it like to be a footnote in history? Ask Rose Woods, President Nixon's loyal secretary who was responsible for the erasing several minutes of the infamous Nixon Audio Tapes that were central to the Watergate scandal. Woods is the central character in New Georges' production of STRETCH: a fantasia which is being workshopped as part of the Ice Factory summer series at the Ohio Theatre. The play, written by New Georges Artistic Director Susan Bernfield is set in the final days of Rose Woods' life at a nursing home in Ohio during the 2004 presidential election. It's a smart and funny show at the center of which is a terrific performance by Kristin Griffith as Rose. The production, directed by Emma Griffin is excellent with music by Rachel Peters, performed live by Peter Ajemian, Dan Bartfield, Kate Kelly, Phil Smith. I look forward to a future full production of this play.

For tickets & Info: www.sohothinktank.org/icefactory.html
Posted by Ludlow Lad at 10:38 AM 1 comment:

You can now download the 2007 Fringe Guide and start choosing your shows!

Tickets go on sale at midnight on July 20th.

For more info: www.fringenyc.org
Posted by Ludlow Lad at 8:53 AM No comments: 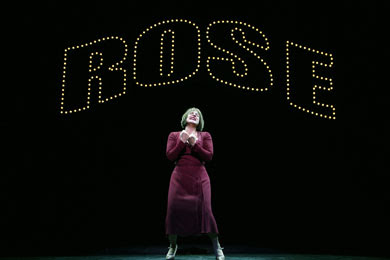 I was really looking forward to the Summer Encores production of Gypsy with Patti LuPone. Gypsy has to be one of the finest musicals ever written and LuPone one of the true divas of the musical theater today. When you toss in the talents of Boyd Gaines, Laura Benanti, Alison Fraser, and Nancy Opel under the direction of Arthur Laurents the hopes of a smash evening are high. Unfortunately what is on stage at City Center seems like a rushed, thrown-together half-effort. LuPone shines in some musical numbers and some of the scenes as well – but the feeling of the over-all production is that of a skimpy bargain basement knock-off of a name brand original. The fact that so many of the numbers are performed at a faster-than-usual tempo doesn't help the rushed feeling of the whole show. It made me miss the Tyne Daily production more than ever.

For Tickets & Info: www.nycitycenter.org
Posted by Ludlow Lad at 7:32 AM 1 comment: