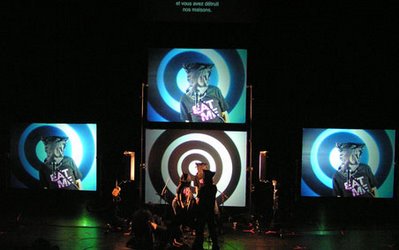 The US Premiere of Dead Set #3 by the always-amazing Big Art Group is being presented at The Kitchen as part of Under The Radar 2007.

An explosive hybrid performance of video and theatre, Dead Set #3 explores the embodiment of trauma through a synthesis of reenacted pirated dialogue, borrowed online chats, and choreographic action derived from sampled movement. An acid-drenched schizophrenic portrait reflecting the disturbing state of contemporary life subsumed within increasingly brutal media spectacles, Dead Set #3 wields the weapons of information battlespace and turns them against their makers. A hypnotic and disturbing work from the vanguard of iconoclastic theatre. 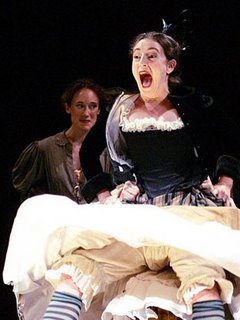 The fabulous company - The Civilians - are presenting a free reading (with music) of the piece, Paris Commune, this Friday – December 1st.

Paris Commune draws on 19th Century cabaret to stage the Parisian uprising and brief autonomous government of 1871—arguably the first socialist revolution. Created by Steven Cosson and Michael Friedman and developed from primary source materials and actual songs from the period.

Preview: 'TWAS THE NIGHT BEFORE 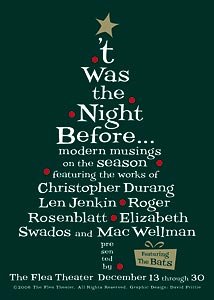 Now that Thanksgiving is over, it’s time to move on to Christmas and this sounds like MY kind of Christmas show! New plays by some of my favorite playwrights: "Not a Creature was Stirring" by Christopher Durang, "Christmas Song" by Len Jenkin, "Away in the Manger" by Roger Rosenblatt, "Holiday Movies" by Elizabeth Swados and "Before The Before and Before That" by Mac Wellman.

For Tickets & Info: www.theflea.org
Posted by Ludlow Lad at 12:01 PM No comments:

1. Soho Rep: Some of my most favorite theater experiences have been at Soho Rep. Such great productions as Mac Wellman’s Dracula and Swoop, Len Jenkin’s Careless Love and Dark Ride, Wendy MacLeod’s The House of Yes, Melissa James Gibson’s [sic] and Suitcase, Madelyn Kent’s Peninsula and most recently The Thugs by Adam Bock make Soho Rep my personal favorite theater company in nyc . Julian Webber and Daniel Aukin were both excellent Artistic Directors – here’s wishing the best to new Artistic Director Sarah Benson.

2. Richard Foreman: Pretty much annually since 1968, Richard Foreman has been creating his unique, smart, intellectual works for the stage. It wouldn’t seem like January without a new work from Foreman. I've seen everything he's done since I've Got The Shakes, often numerous times, and wouldn't dream of missing one.

3. Wooster Group: Elizabeth LeCompte, Kate Valk and the other artists of The Wooster Group have created some of the most innovative works of theater you could ever wish to see. Precisely executed and superbly designed pieces that are unforgettable.

4. Pavol Liska: Pavol Liska is certainly at the forefront of the next generation of GREAT theater artists in the tradition of Richard Foreman and The Wooster Group. I was hooked on Liska from the very first piece of his a saw, Train Station – presented as part of the Ontological-Hysteric Theatre’s Blueprint Series – and have seen almost everything he has done since. He is finally starting to get the wide recognition he deserves.

5. NYTheatre.com: NYTheater.com just celebrated their 10th anniversary. I love Martin Denton’s mission to support emerging theater artists by covering work that may otherwise go without any media coverage. It is one of the sites I check on a daily basis, often just to browse what is currently happening or what will be coming soon off-off Broadway.

7. OBIE Awards – Awards without nominations alone makes the OBIE Awards special. Looking over a list of past OBIE winners is incredible ; it’s like a who’s who of everyone important in NYC theater.

8. Michael Feingold – Michael Feingold is the smartest theater critic currently working. I feel as though I’m smarter myself after reading his essays for the Village Voice. I love how he can review two works that seem completely different and find the unimagined commonalities.

9. PS122 – For over 20 years, PS122 has been the home to NYC most important independent performers and theater companies. From performers like Ethyl Eichelberger and Spaulding Gray to Karen Finley and Tim Miller and companies like Big Art Group, Elevator Repair Service and Radiohole, PS122 has played an important role in the history of alternative theater.

Posted by Ludlow Lad at 5:53 AM No comments:

According to today’s New York Times, The Culture Project is moving to the old Manhattan Ensemble Theater space on Mercer Street.

The link to the full article is below, but here are the “highlights” as I see them:

Posted by Ludlow Lad at 4:25 AM No comments:

No Dice: a work-in-progress 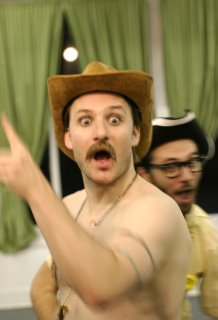 Nature Theater of Oklahoma [aka Pavol Liska and Kelly Copper] will be presenting a work-in-progress prentation of No Dice, described as “a short 4 hour version of the legendary 11 hour melodramatic spectacle. An epic of the everyday blown to transcendental proportions, No Dice takes over one hundred hours of the company's recorded telephone conversations and filters them through the conventions of amateur dinner theater to arrive at a uniquely mind-altering experience.”

A chance to see anything by Pavol and Kelly should not be missed.

In addition to NYTheater.com as an online resource, Martin publishes an annual anthology of plays produced off-off Broadway and has recently published Playing With Canons which is a collection of new adaptations of the classics.

Here’s to the next 10 years of Nytheater.com. Cheers!

Link: www.nytheatre.com
Posted by Ludlow Lad at 5:23 AM No comments:

Rafael Spregelburd’s Panic is a transcendental farce centering around Emilio, who has recently died. Emilio’s ex-girlfriend (and former adopted mother) and her two children are searching for the missing key to his safe deposit box, in which they believe is a large sum of money. Like early films of Pedro Almodóvar, Panic is filled with wacky characters who seem to enhabit a world of their own. There is some very funny and good work by much of the large cast, most notably Jess Barbagallo, Tatiana Pavela, Maggie Mariolis and Tina Shepard. But while the show starts out promising, it soon runs out of steam with many of the scenes running too long. Panic is part of the Buenos Aires in Translation [BAIT] series at PS122 and it struck me that in this play and as well as the other play in the series I saw, Women Dreamt Horses (directed by Jay Sheib), the directors far outshined their material. In this case the very talented Brooke O'Harra of The Theatre of a Two-Headed Calf, infuses live music into the production by way of Jubal Fulks on violin and Sam Hillmer on clarinet.

Apparently the Impact Festival was a flop and has caused a downward spiral of The Culture Project.

You can read the full story here: http://www.culturebot.org/archives/2006/11/17/TheImpactOfTheImpactFestival.php
Posted by Ludlow Lad at 8:37 AM No comments:

Broadway Unplugged is Scott Siegel’s annual plea for the doing away with amplification of performers in Broadway musicals. Similar to a trial, each year Siegel presents almost two dozen witnesses to testify, in song, that the Broadway musical does not need microphones. This year’s highlights were Sarah Uriarte Berry’s “Somebody Somewhere” from The Most Happy Fella, Barg Jungr’s “When You’re Good to Mama” from Chicago, Liz McCartney’s “Cornet Man” from Funny Girl, Eddie Korbich’s “Love in a New Tempo” from New Faces of 1952, Euan Morton’s “Not While I’m Around” from Sweeney Todd and Beth Leavel’s show-stopping “Surabaya-Santa” from Songs for a New World (which is actually an Off-Broadway show). Siegal (who is ironically the only person using a microphone on stage) makes a good case for doing away with amplification with anecdotes and facts that accompany his introductions, but alas we have a better chance of getting Disney out of Broadway theaters than we do of getting rid of amplification. But at least Scott Siegel allows us to dream for one night.
Posted by Ludlow Lad at 12:36 AM No comments:

Daniel Veronese’s play Women Dremt Horses (translated by Jean Graham-Jones) is being presented at PS122 as part of their Buenos Aires in Translation [BAIT] series. Women Dremt Horses is strange play about three couples who gather at a dinner party during which secrets are revealed amidst an air of violence. I wasn’t crazy about the play; to me it seemed like Harold Pinter meets Sam Shepard – with all of the vagueness of the former and the heavy-handed symbolism of the later. Thankfully Jay Scheib’s direction keeps things interesting with random bursts of energy, volume and a large collection of intriguing choices by his cast, most notably Aimée Phelan-Deconinck.

No, not the famous musical flop. Theatre Couture, the company behind The Bad Weed, e.s.p - Eyes of a Supermodel Psychic, Kitty Killer, Tell-Tale and Doll will present a new stage adaptation of the Stephen King novel (and most likely of the 1976 Brian De Palma film version as well) by Erik Jackson. Drag performer Sherry Vine will star in the title role; Josh Rosenzweig directs and there will be “thrilling visual effects” by Basil Twist of Symphonie Fantastique fame. This should be a hoot. 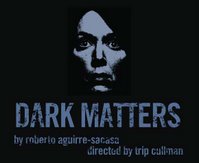 Belief in aliens and alien abduction as a metaphor for escaping a troubled family life could make for an interesting play – but not so for Roberto Aguirre-Sacasa’s Dark Matters. Grounded in a naturalistic approach and played with movie-of-the-week earnestness, Dark Matters is doomed from the first scene. Trip Cullman’s direction doesn’t help much; he basically leaves no melodramatic trick untried. Even the wonderful Elizabeth Marvel can’t salvage the evening when the odds are stacked so wildly against her. I understand that I did see the first preview, but unless Dark Matters undergoes a total rewrite, I can’t see it getting much better.

For tickets and info: www.rattlestick.org
Posted by Ludlow Lad at 11:10 PM No comments: 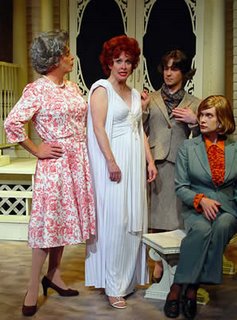 My Deah is John Epperson’s Deep South adaptation of Euripides’ Medea. In the style of Ridiculous Theater, My Deah is complete with multiple drag performances, numerous puns and one-liners, the obligatory hunk, references to other works (from Tennessee Williams to Disney's Song of the South) and a starring diva role at the center of the play. In this case the diva is played by an actual woman – Nancy Opel. In fact, Opel plays two roles – both My Deah Hedgepeth and her maid, Lillie V. Her performance as Lillie is a brilliantly funny homage to Agnes Moorehead’s performance in the 1964 film Hush... Hush, Sweet Charlotte and almost upstages her performance in the title role. There is much that is very funny in My Deah, but there is also much humor that lands with a crashing thud, which is surprising as the play has been read and workshopped enough times to determine what wasn’t working. The pace of the evening isn’t quick enough, with enough rapid-fire laughs to overcome the duds and by the end of the ninety-minute running time, the evening does begin to feel long. Thankfully, the visually amusing deus ex machina is worth the wait.

For tickets & Info: http://www.abingdontheatre.org/
Posted by Ludlow Lad at 10:33 PM No comments: