Here are 13 shows that Ludlow Lad is excited about seeing this fall:

underneathmybed: A new play by Florencia Lozano in which ghosts of a dirty foreign war haunt a family. Rattlestick Theatre; starts September 1. www.rattlestick.org

Down There: Based on the real-life 1965 torture murder of Sylvia Likens, Down There is a new play from Axis Company, written and directed by Randy Sharp. Axis Theatre; starts September 9. www.axiscompany.org

The Divine Sister: Charles Busch gets back to his roots in this hilarious new comedy that was workshopped at Theater for the New City earlier this year. Soho Playhouse; starts September 12. www.divinesisteronstage.com

Orange, Hat and Grace: Artistic Director Sarah Benson directs this new play by Gregory S. Moss that is described as a funny, fierce and provocative inquiry into our relationship with the natural world. Soho Rep; starts September 15. www.sohorep.org

Three Sisters Come and Go: Anton Chekhov vs. Samuel Beckett vs. Julia Kristeva in this beautifully designed piece that gets a return engagement at Theaterlab; starts September 29. www.theaterlabnyc.comli

Middletown: A new play by Will Eno, directed by Ken Rus Schmoll that explores the universe of a small American town. Vineyard Theatre; starts October 13. www.vineyardtheatre.org

(oh my god I am so) THIRST(y): Little Lords bring back their great adaptation of Eugene O’Neill’s play. October 21 - 30, 2010 @ Incubator Arts Project www.littlelord.org
Posted by Ludlow Lad at 10:45 AM No comments:

The productions that will be part of the 2010 Fringe Encores Series have been announced.

Getting Even With Shakespeare
How My Mother Died of Cancer, and Other Bedtime Stories
SOUTH PATHETIC
PigPen Presents: The Nightmare Story
Over and Over
The Twentieth-Century Way
Running
Saving Throw Versus Love
Hearts Full of Blood
Amsterdam Abortion Survivor
Faye Lane's Beauty Shop Stories
The Hurricane Katrina Comedy Festival
Lost and Found
MADE IN TAIWAN
BUNKED!: A New Musical
Just In Time - The Judy Holliday Story
POPE! An Epic Musical
Jurassic Parq: The Broadway Musical
When Last We Flew
The Secretaries
and
Viva Los Bastarditos!

For Dates, Times and Tickets fo to: www.fringenyc-encores.com
Posted by Ludlow Lad at 1:54 AM 4 comments: 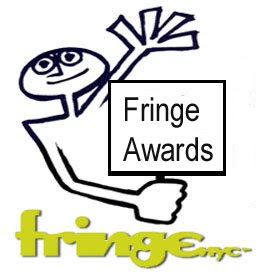 
Excellence in Music and Lyrics:

In a cabin in the woods, aging Orange finds her orderly life upended by a feral suitor and the reappearance of a figure from her past who's come home for a final visit. Equal parts American gothic and unlikely romance, ORANGE, HAT & GRACE is a funny, fierce and provocative inquiry into our relationship with the natural world.

Posted by Ludlow Lad at 1:12 PM No comments:

In Defense of Fringe

Once again people are questioning the existence of The New York International Fringe Festival. Our question is: When was the last time you saw a people lined up down the block or around the corner to get into the Lucile Lortel or the Players Theater? The Fringe succeeds in making people excited about theater. And on that score alone Ludlow Lad give it a big thumbs up.


But let’s address some of the complaints in the recent NY Times article . Since year one, FringeNYC was criticized for adjudicating participants, yet these are usually the same people that complain about the random quality. You can’t have it both ways; does anything think the quality would be better if FringeNYC participants were admitted on a first-come-first-served or lottery basis?

Ludlow Lad is not even sure what part of FringeNYC is “poorly orginized” according to Jason Zinoman. Every show starts pretty much on time and there is no late seating - rules Ludlow Lad thinks should become law in NYC. The fact that 197 shows happen at 18 venues without incident is pretty amazing actually. We rarely see box office incidents or house management issues at all. One line for Will Call and one line for Ticket Buyers - it’s pretty efficient.

As we’ve said before, it would be wonderful if Fringe NYC could happen in a geographically concentrated area - but did you see East 4th Street this year? There were six venues between Bowery and 2nd Avenue. What other block has more venues than that? The only thing that could have made it better (besides getting New York Theater Workshop as a venue) would be having Fringe Central on that block, too.

And of course it difficult finding the gems among 197 shows. Maybe the Fringe website needs to allow for slightly longer descriptions - but that could become even harder to navigate. Maybe space could be allotted to previous credits of the participants of each show - but even that is no grantee of success. As a former FringeNYC participant, Ludlow Lad would argue for longer tech time in the assigned venues - this could allow for better production values (or at least smoother first performances). But as someone who is NOT looking for the the next Broadway hit and just looking for some interesting shows, Ludlow Lad thinks Elena Holy and the whole FringeNYC teal to an outstanding job and we’d hate to see the The York International Fringe Festival go anywhere!
Posted by Ludlow Lad at 12:38 PM No comments:

Ludlow Lad enjoyed the most recent batch of Fringe shows he saw: Jurassic Parq: The Broadway Musical was a lot of good, silly fun with the Jurassic Park story being told from the dinosaurs’ point of view. Brandon Espinoza was quite good as Mimeasaurus.

At the totally other end of the Fringe spectrum was Veritas (photo above), Stan Richardson’s play very good about a real-life witch-hunt for gays at Harvard in the 1920’s. The cast is uniformly good under Ryan J. Davis’ excellent direction. If they manage to re-think the final twenty minutes, the show could be brilliant. 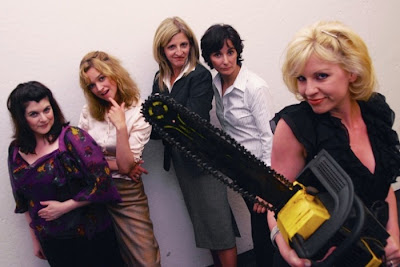 And finally, Ludlow Lad caught the TOSOS production of The Secretaries (photo above) and had a seriously great time. The cast of five could not be better and director Mark Finley keeps things moving at exactly the right pace. This show is hilarious!

For tickets and info: CLICK HERE
Posted by Ludlow Lad at 12:45 PM No comments:

The first week of the 2010 New York International Fringe Festival is over. Ludlow Lad has seen eleven or twelve shows with another five or so to go. Among the best of the Fringe this year, from what Ludlow saw, were: Butterfly Butterfly Kill Kill Kill (photo below) a kabuki-noir with film, live music and puppets. 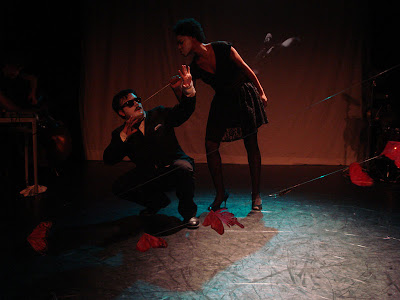 Getting Even With Shakespeare invents a very funny world where the Bard’s title characters live on are are forced to endure every performance of their namesake plays and conspire against their creator. Terror Super Highway is a gritty, contemporary tale of an American everyman who is swept up in an investigation of terror financing and its consequences for both him and us. Miss Magnolia Beaumont goes to Provincetown is a sweet and funny solo show about a southern debutant trapped in the body of a thirty-something gay male - it’s better than it sounds! Jurassic Parq: The Broadway Musical is just plain silly - a musical version of the famous film, told from the dinosaurs’ point of view. Ludlow Lad laughed a lot. 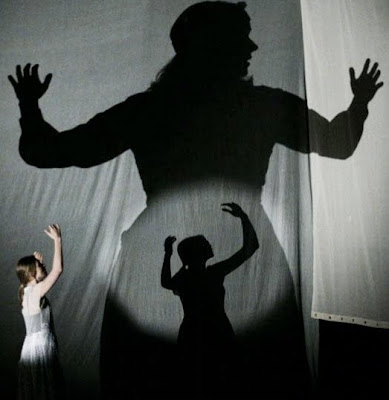 And when you need a break from it all, just sit back and enjoy the thirty-minute stage pictures created during Ground To Cloud (photo above), some of which are even in 3D (glasses included).

Tickets and Info can be found for all Fringe shows at www.fringenyc.org.
Posted by Ludlow Lad at 8:26 AM No comments:

After tweeting "WTF?" regarding Ghost of Dracula, Ludlow Lad received the following message:

We're thrilled our show garnered a "WTF?" from you! We are certainly one of the most off-kilter casts and crews in FringeNYC. Attached is our image, and we'd love if you could use it on your wonderful blog. 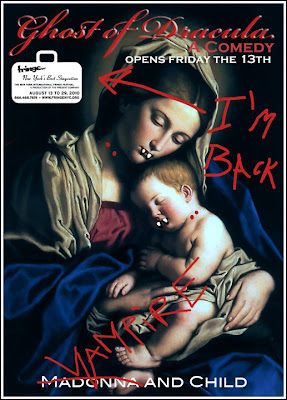 Here is the description of the show:

The bastard child of "Dracula" and "The Breakfast Club," with a lot more blood, and music. There's sex, rocket propelled grenades, and piss made of holy water. There's also a ghost vampire, or vampire ghost. Interchangeable terms? I don't know.

The Wooster Group Does Tennessee Williams

The Wooster Group brings its production of Tennessee Williams' Vieux Carre to Edinburgh. Ludlow Lad isn't sure when we will see this show in NYC, but here are some production photos: 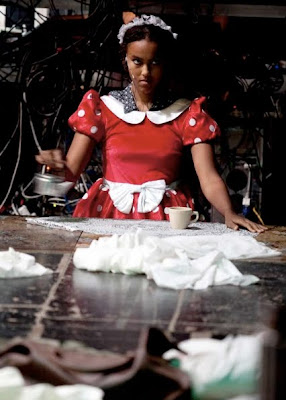 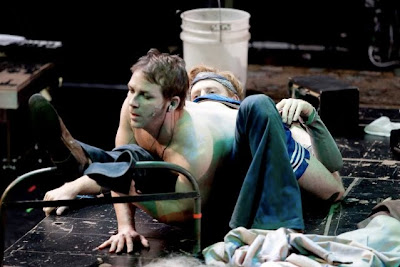 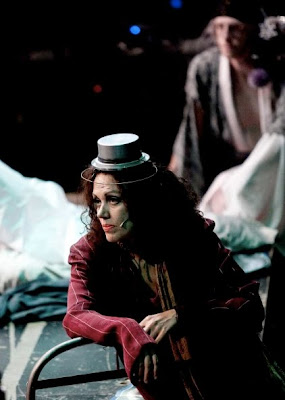 Posted by Ludlow Lad at 9:31 AM No comments: