7. Go Back To Where You Are (by David Greenspan; directed by Leigh Silverman @ Playrights Horizons)

9. Our Lot (by Kristin Newbom and W. David Hancock; directed by May Adrales for Clubbed Thumb @ Here)

13. The Tempest (by William Shakespeare; directed by David Herskovits for Target Margin @ Here)

15. Your Brother, Remember? (Conceived, directed, edited, performed by Zachary Oberzan for Under The Radar @ Dixon Place)

16. Here At Home (by Eric Bland; directed by Shannon Sindelar for 31 Down @ Bushwick Starr)

18. The Bardy Bunch (by Stephen Garvey; directed by Jay Stern for FringeNYC @ LaMama)

19. Sweet and Sad (written and directed by Richard Nelson @ The Public Theater)

20. Walk Across America for Mother Earth (by Taylor Mac; directed by Paul Zimet for Talking Band @ LaMama)
Posted by Ludlow Lad at 8:54 AM No comments: 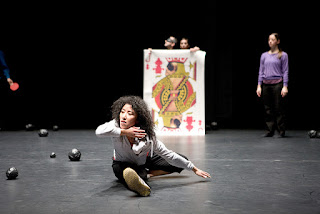 Extra credit always goes to the first time I discover a new company/artist, and this was the case with William Forsythe Company and I DON'T BELIEVE IN OUTER SPACE this year at BAM.  The piece was at once weird and uncomfortable and funny in the way it created its own reality on stage at the Opera House in Brooklyn. Forsythe created a series of images, with both props and bodies that were playful at times and threatening at other times highlighted by the way he used Gloria Gaynor's "I Will Survive" which at times had the audience giggling and at times silent.  Special thanks to the friend who recommend I see this. 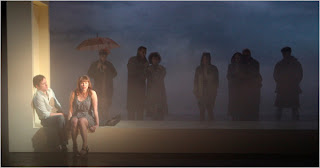 Bathsheba Doran's play KIN was a rich treat. The attention to detail was perfectly matched by Sam Gold's excellent production performed by a perfect ensemble. KIN unfolded across various locations, included seemingly random characters and situations all woven together beautifully, all coming together like a picture slowly coming into focus. KIN was an amazing experience and an excellent play. Kudos to Playwrights Horizons for producing this kind of theater.
Posted by Ludlow Lad at 11:36 PM No comments: 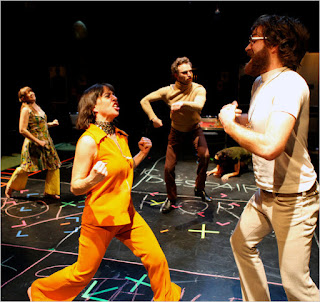 The Austin-based Rude Mechanicals brought their show, THE METHOD GUN, to NYC for an all-too-brief run at Dance Theater Workshop (now New York Live Arts).  To be completely honest, about half-way through METHOD GUN, I felt lost and disengaged, however by the end, with the big coup de theatre and lovely denouement I was completely won over and a little misty-eyed. I would see this show again in a minute!
Posted by Ludlow Lad at 12:03 PM No comments: 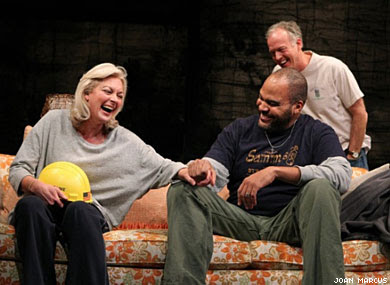 Adam Bock's A SMALL FIRE was a big triumph. He took what could have been a melodramatic disease-of-the-week premise and lifted it to extensional proportions. It also didn't hurt that it was given a sublime production at Playwrights Horizons with a cast that included Michele Pawk and Reed Birney and possibly the best direction that Trip Cullman has done to date.
Posted by Ludlow Lad at 4:43 PM No comments: 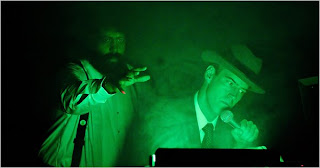 Dark and musical, Reggie Watts' RADIO PLAY at Performance Space 122 was a surreal experience; like a 1940's radio play on acid.  There was no real "plot" to speak of, but Watt's and a cast of four performed vignettes with vocal precision and confidence. Even now I can't really tell you what it was all about, but it was quite a trip and it stuck with me enough to land at #5.
Posted by Ludlow Lad at 1:09 PM No comments: 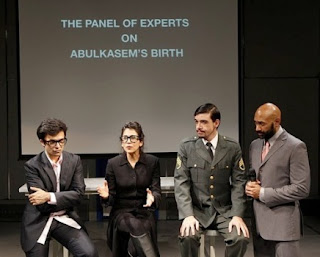 The Play Company's INVASION! started off with an unforgettable bang - the kind of thing you wish would happen more often in the theater and it freaked the audience out.  At the performance I attended, I thought a known theater journalist was actually going to strike what turned out to be one of the actors.  And the rest of the play lived up to the bravura beginning.  The play was so tuned in to  contemporary America that it is hard to believe it was written by the Swedish playwright, Jonas Hassen Khemiria. Since I don't speak or read Swedish, special acknowledgement must go to Rachel Willson-Broyles for what must be a masterful translation. Long live Abul Kasem!
Posted by Ludlow Lad at 8:20 AM No comments: 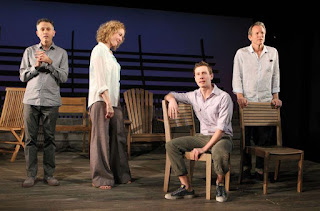 David Greenspan's GO BACK TO WHERE YOU ARE was completely delightful love note to the theater.  The sheer fact that Greenspan was able to pack so much intelligence, humor and time-trippy fun into sixty minutes is a feat unto itself. The ensemble, including Greenspan, was sublime and I was lucky enough to catch the wonderful Mary Shultz in the show before she had to depart early for personal reasons.  And as complex as the play was, director Leigh Silverman did a terrific job making everything flow beautifully.  Thanks to Playwrights Horizons for their dedication to David Greenspan. 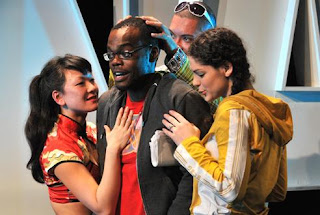 The awesome Vampire Cowboys took their geek aesthetic to a new level in 2011 with THE INEXPLICABLE REDEMPTION OF AGENT G. Produced with Incubators Arts Project, AGENT G introduced a more complex dramaturgy by introducing autobiographical elements of author Qui Nguyen as well as Nguyen himself as a character (although played by someone else) and even playwright David Henry Hwang as another character. The result was an even richer experience than previous VC shows.
Posted by Ludlow Lad at 8:59 AM No comments: 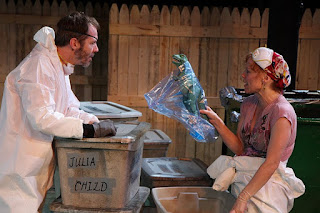 Every year, the excellent Clubbed Thumb presents three new works in fully staged productions for what they call Summerworks.  One of this year's selections was OUR LOT co-written by Kristin Newbom and W. David Hancock and it was totally hypnotic (in a great way). Three children gather to clean out the belongings of their late step-father who kept collections of items in carefully labeled plastic bins (John Lennon, Julia Child, Charles Darwin).  The set-up is brilliant - the stored items were usually more personal than (and in many instances were barely related to) the container they were in.  I loved this play and it deserves a longer return engagement.
Posted by Ludlow Lad at 11:20 AM No comments: 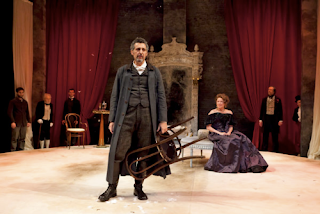 Posted by Ludlow Lad at 1:57 PM No comments: 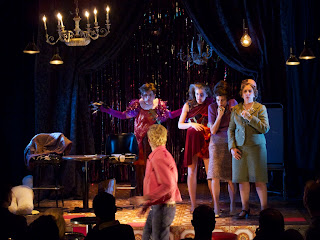 Another Tennessee Williams' play received an imaginative production this year, this time from director Jonathan Warman.  Actually, it was the New York premiere of NOW THE CATS WITH JEWELLED CLAWS, a one-act from Williams, uncharacteristically set in New York City and had a cast that included cult stars Everett Quinton and Mink Stole and the fabulous Erin Markey.   This show was a gem indeed.
Posted by Ludlow Lad at 11:35 PM No comments: 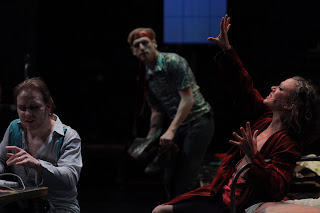 Tennessee Williams late play, VIEUX CARRÉ was tackled by The Wooster Group in 2011 with the Group's usual mix of physicality and technology.  Whereas their Hamlet was Scott Shepherd's "show" this was very much Ari Fliakos' moment in the spotlight as Williams' alter-ego.

Posted by Ludlow Lad at 8:05 AM No comments: 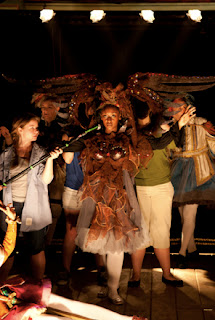 In May, the invaluable Target Margin presented Shakespeare's last play, THE TEMPEST, at Here Arts Center, for which they built their version of The Globe.  It was a spirited and magical production that I wish more people had the pleasure of seeing.
Posted by Ludlow Lad at 7:01 PM No comments: 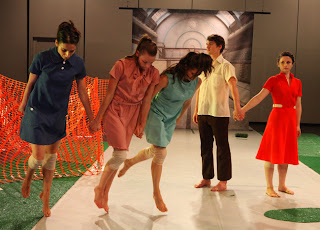 Originally presented as a site-specific work performed in a church courtyard as part of the River To River Festival, 2 KILOS OF SEA was re-imagined for an all-to-brief run at Baryshnikov Arts Center.  It was a playful dance piece by Deganit Shemy + Company that was both theatrical and fun.
Posted by Ludlow Lad at 5:44 PM 1 comment: 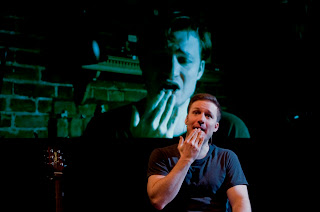 Theater doesn't get more personal than YOUR BROTHER, REMEMBER? Splicing together childhood home-made films with 80s films, Zachery Oberzan's piece for the Under The Radar festival managed to be both hilarious and very touching. 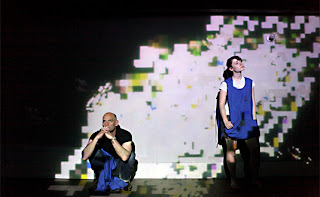 31 Down's HERE AT HOME was and aurally and visually stimulating piece about the impact of war. It was Eric Bogosian meets Sarah Kane with terrific performances by D. J. Mendel and Hollis Witherspoon. The lighting/video projections were amazing. Director Shannon Sindelar is someone to watch.
Posted by Ludlow Lad at 11:56 AM No comments: 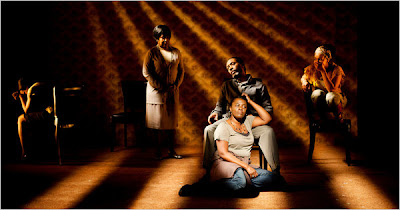 Soho Rep brought us the US premiere of playwright Debbie Tucker Green with BORN BAD, a lyrical, hour-long "poem" of a play what was solidly acted by a terrific and dedicated ensemble of five and beautifully directed by Leah C. Gardiner. Hopefully we will see more of this young British playwright.
Posted by Ludlow Lad at 12:07 PM No comments: 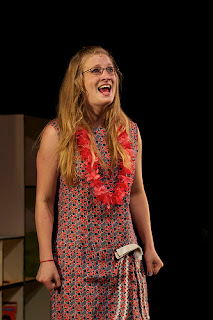 THE BARDY BUNCH was The Brady Bunch vs The Partridge Family vis a vie Shakespeare. Marcia Brady as Juliet. David Partridge as Romeo. Jan as Ophelia. Mrs. Brady as Lady Macbeth. And on and on. Clever choreography. Brisk direction. THE BARDY BUNCH was the perfect Fringe show!
Posted by Ludlow Lad at 8:24 AM 1 comment: 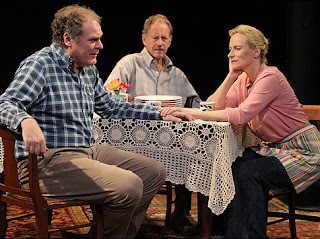 Written and directed by Richard Nelson, SWEET AND SAD is the second of three personally-political plays set on a specific day during each of the years they are presented at The Public Theater.  This one was set on the tenth anniversary of the attacks of September 11th, 2001.  The ensemble work so beautifully together you have a hard time believing they have not known each other for years.  I look forward to the final installment which will be set on election night 2012.

Posted by Ludlow Lad at 7:55 PM No comments: