Originally begun as part of the Naturalism movement, Le Theatre du Grand Guignol quickly mutated into what it has become famous for: horror. So this halloween you may want to check out www.grandguignol.com - “The most complete source of Grand Guignol information on the net.” The site was created by the San Francisco theater company, Thrillpeddlers, who specilize in Grand Guignol plays and who are currently presenting Shocktoberfest!! 2006.

Happy Halloween!
Posted by Ludlow Lad at 8:28 AM No comments: 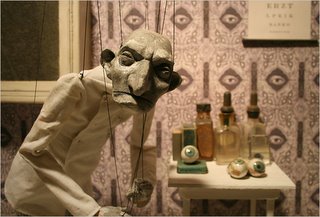 Marionettes make for such interesting performers. Every tilt of the head and gesture of the arm become instilled with meaning and every slip of the wrist and tangled wire just serve to underline the tension that is present in all live performance, but that we sometimes forget. Erik Sanko's The Fortune Teller is a gothic marionette tale of fate, fortune and justice. Seven benefactors are called to the reading of a will at which a mysterious fortuneteller proceeds to describe each of their fates. The seven include a gluttonous chief, an envious optometrist, a lustful ventriloquist – oh, well, you get the idea… Sanko’s Edward Gorey-like marionettes are each masterful works of art. No less wonderful is Selin Maner’s mansion in which the piece is performed. And Gavin Friday’s superb narration rival’s Boris Karloff’s narration of How the Grinch Stole Christmas in the Narration Hall of Fame. The Fortune Teller is the perfect Halloween show that I hope will become an annual tradition.

For Tickets & Info: www.here.org
Posted by Ludlow Lad at 9:32 PM No comments:

The important Vineyard Theatre is currently having a benefit e-bay auction. There are lots of cool theater-related items to bid on – with the proceeds going to one of the best theater companies in the city, if not the country!

Adam Bock's The Thugs may be the best play ever written about working in a 20th/21st century office; specifically the uncertain and undefined world of temp workers. The play takes place on the 9th floor offices of an unnamed law firm in which numerous long-term temp workers are employed to review files for a vaguely described "dumb" case. But people are dying, disappearing or perhaps being murdered in the building – or maybe not; maybe it's just the overactive imagination of the underutilized brains of these workers. Bock's language is purposely sparse – sort of David Mamet meets Rich Maxwell. Anne Kauffman precisely directs the production making it at once hilarious and frightening. And it is casts like this for which ensemble awards are given. The Thugs original short run has been deservedly extended by two weeks, giving anyone who would like to see one of the best shows of 2006 some extra chances. Soho Rep strikes gold yet again! Bravo!
For tickets: www.smarttix.com
And info: www.sohorep.org
Posted by Ludlow Lad at 10:25 PM No comments: 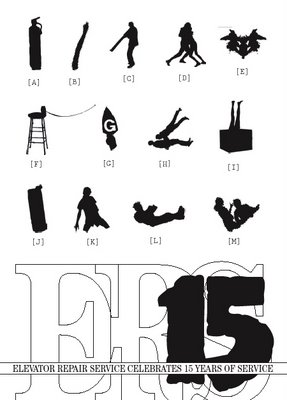 It's hard to believe that the fabulous Elevator Repair Service is turning 15! They are having a benefit birthday party to celebrate. Like everything they do, I'm sure it will be special...
ERS 15th Birthday Party Benefit
November 18, 2006
Hosted by New York Radio PersonalityVIN SCELSA (WFUV, Sirius).
at M1-5, 52 Walker St between Church and Broadway
6pm–late, Saturday 18 November 2006(Performances at 7:30, free food and drinks until 10)
Performances by ERS, Ethan Lipton and a gang of Susie Sokol’s former 2nd Graders
wine provided by
Beaujolais Nouveau2006 and tasty bites from
Gigino Trattoria
DJing by James Hannaham
A piñata, an auction, dancing
TICKETS: $50 in advance, $60 at the door
For more information call: 718-783-1905
For Tickets and Info: www.elevator.org/benefit.html
Answers to above Ink blot test: [a] Mr. Antipyrine, Fire Extinguisher [b] Marx Brothers on Horseback Salad, [c] Spine Check [d] Language Instruction: Love Family vs. Andy Kaufman [e] ink blot [f] McGurk: A Cautionary Tale [g] Shut-Up I Tell You [h] Cab Legs [i] Total Fictional Lie [j] Highway to Tomorrow [k] Room Tone [l] Gatz [m] No Great Society.
Posted by Ludlow Lad at 5:43 AM No comments: 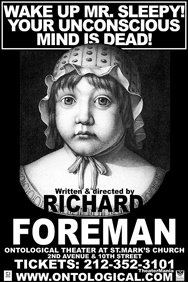 Every January, serious theatergoers get a cerebral workout at St. Mark’s Church in the East Village when Richard Foreman unveils his annual theater piece. Foreman’s next production will be WAKE UP MR. SLEEPY! YOUR UNCONSCIOUS MIND IS DEAD! And to add to the build-up, Foreman is blogging about the process.
Foreman Blog: http://www.wakeupmrsleepy.blogspot.com/
Posted by Ludlow Lad at 7:39 AM No comments: 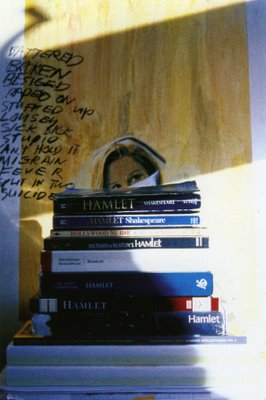 I just got the postcard for The Wooster Group's
production of HAMLET.

It will be presented in Paris and Berlin prior to arriving at St. Ann's Warehouse. The run at St. Ann's will be considered "previews" and not open for review.

The interesting news was that the postcard said:
"Opens at The Public Theater: fall'07"

Posted by Ludlow Lad at 1:15 PM No comments:

From: www.overheardinnewyork.com
Posted by Ludlow Lad at 1:27 PM No comments:

The Blood Brothers Present: An Evening of Grand Guignol Horror

Just in time for Halloween, Nosedive Productions presents two original Grand Guignol texts, The Final Kiss and The Kiss of Blood in An Evening of Grand Guignol Horror. The French theatre of horror, poplar from the lat 19th through mid-20th century was famous (infamous) for graphic violence and lurid sex. Obviously, these were areas that could be done way more effectively in film, hence the downfall of La Grand Guignol, but I am very interested to see how well the Blood Brothers are able to pull off this rather difficult stage genre.

For Tickets: www.theatermania.com and
For Info: www.nosediveproductions.com
Posted by Ludlow Lad at 3:18 PM No comments:

For 2006-2007, the Obie Awards committee will be chaired by Michael Feingold. The judges will be the following:

OBIES Info: www.villagevoice.com/obies
Posted by Ludlow Lad at 11:31 AM No comments:

New Works Now at The Public

This year, New Works Now goes political, presenting the Arab/Israeli Festival. The Public Theater is joined by The Flea Theater, New York Theatre Workshop, Nibras, The New York Arab-American Comedy Festival and The Culture Project in presenting works by Israeli and Arab writers as well as American playwrights writing in response to the situation in the Middle East.

IN THE RED AND BROWN WATER
Written by Tarell McCraney
Directed by Tina Landau
Wednesday, October 25th at 8:30pm

WHEN THE BULBUL STOPPED SINGING
Adapted from the book of diaries of Raja Shehadeh by David Greig
Directed by Joanne Akalaitis
Friday, October 27th at 8:30

THE GOOD NEGRO
By Tracey Scott Wilson
Directed by Leisl Tommy
A fictional account of the everyday struggles faced by the men and women on the front lines of the epic Civil Rights struggle and the FBI investigators who silently track their every move.Sunday, October 29th at 7pm

THE MURDER OF ISAAC
By Motti Lerner
Translated from the Hebrew by Anthony Berris
Directed by Irene Lewis
Monday, October 30th at 8:30pm

AGAIN AND AGAINST - THE ART OF HOPING INDEFINITELY
By Betty Shamieh
Directed by Robert O'Hara
Saturday, November 4th at 8:30pmNew Work Now! at Joe's Pub

For More Info: www.publictheater.org
Posted by Ludlow Lad at 6:35 AM No comments:

I´m happy to let you know about a new blog I´ve been alerted to, London Theatre Blog! This is the Internet at its BEST. Whenever I go to London, it´s always hard to know what to go see. I´m hoping this will help.

Create. Debate. Collaborate. London Theatre Blog is an exciting new website that aims to stimulate discussion, interest and analysis on contemporary performance practice in London and beyond.

Open invitations to guest writers for the submission of short performance-related articles will play a key role in transforming the blog into a rich and engaging resource for anyone interested in performance.

In addition to the weekly blog entries and feature articles, there will be frequent interviews with practioners, performance reviews, information on up-coming performance events, opportunities for collaborations in performance and a chance to network with the growing international online theatre community.

Link: londontheatreblog.co.uk
Posted by Ludlow Lad at 7:28 AM No comments: 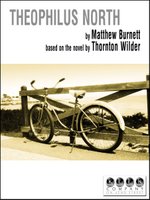 I’m a sucker for Thornton Wilder. Our Town, Skin of Our Teeth, his great one-acts – I really love those plays. Matthew Burnett’s stage adaptation of Wilder’s novel, Theophilus North, fits right in to the dramatic Wilder cannon. As I haven’t read the novel, I can’t comment on how its stage adaptation relates to the source material, but the production currently being presented by the Keen Company has a look and feel that is 100% Wilder. Under the superb direction of Carl Forsman (Keen Company Artistic Director), the entire ensemble is doing fine, detailed character work most in multiple roles, managing to paint vivid portraits in numerous short scenes. It would be unfair to single out anyone, but I will; a real standout is Giorgio Litt (in the title role), making his New York debut, who is never off stage for the entire show. The only disappointment in the evening was that the theater was less than 50% occupied tonight. What a shame.
For tickets & info: www.keencompany.org

Posted by Ludlow Lad at 9:49 PM No comments: