So here are all the non-Broadway Drama Desk Nominees for this year:


Outstanding Actor in a Play
Charles Busch, The Divine Sister
Geoffrey Rush, The Diary of a Madman
Michael Shannon, Mistakes Were Made
Paul Sparks, Dusk Rings a Bell


Outstanding Actress in a Play
Stockard Channing, Other Desert Cities
Laurie Metcalf, The Other Place
Michele Pawk, A Small Fire


Outstanding Actor in a Musical
Christopher Sieber, The Kid


Outstanding Actress in a Musical
NONE


Outstanding Featured Actress in a Musical
Jill Eikenberry, The Kid

• To A.R. Gurney for his enduring, keenly observed portraits of American life over a prolific four-decade-long career.

• To Reed Birney for his versatile and finely nuanced performances over the past thirty-five years, and for his exceptional work this season in Tigers Be Still, A Small Fire and The Dream of the Burning Boy.

• To The New Group and Artistic Director Scott Elliott for presenting contemporary new voices, and for uncompromisingly raw and powerful productions.

• To The Pearl Theatre Company for notable productions of classic plays and nurturing a stalwart resident company of actors.
Posted by Ludlow Lad at 10:28 AM No comments: 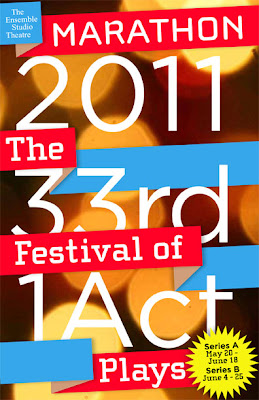 Ensemble Studio Theatre has announced the plays for this year's (the 33rd Annual) Marathon of One Act Plays:

I Know by Jacquelyn Reingold*; directed by Dan Bonnell*
Mrs. Jones and the Man from Dixieland
by Steven Sater* & Duncan Sheik, directed by José Zayas
For Elise by David Zellnik*; directed by Pamela Berlin*
Two from the Line by Michael Louis Wells*, directed by R.J. Tolan*
Cell by Cassandra Medley*, directed by Jamie Richards*

All shows are at 7pm

...and the 2011 Pulitzer Prize for Drama goes to: Bruce Norris' Clybourne Park.


So it's official NYC really missed the boat on this play. It's made quite an impact everywhere else it went.
Posted by Ludlow Lad at 9:52 AM No comments: