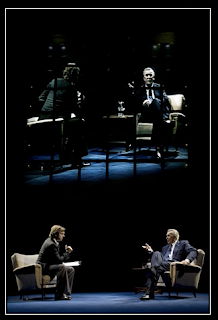 Some great plays spring from actual events. For me, the David Frost interview of Richard Nixon in 1977 was just a post-script to the story of Watergate. But in this real-life drama, playwright Peter Morgan has found the inspiration for an epic battle of wills between two media figures. In Frost/Nixon both Frost and Nixon have everything at stake during the course of these multi-hour dialogs, but as told by Morgan, only one of these men can be victorious. The text is more slanted towards the Frost character (his team has several narrators, while Mr. Nixon has only one) but a fair fight is still to be had because if your underdog is played by Frank Langella he has more than a fighting chance. Similar to that other recent historical British import, Stuff Happens, Frost/Nixon suffers from a little too much plodding exposition at the beginning, but by the end you can't help but be fully involved.

For Tickets & Info: www.frostnixononbroadway.com
Posted by Ludlow Lad at 10:33 PM No comments:

Mike Daisey Gets Dissed (at ART)

Seriously, my jaw dropped when I watched this. Another reason to stay the hell out of Boston.

Posted by Ludlow Lad at 8:40 PM No comments: 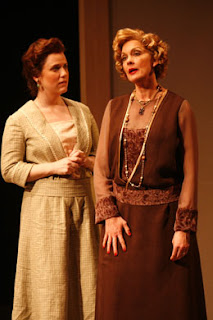 Transport Group's production of William Inge's The Dark at the Top of the Stairs is something to see. Director Jack Cummings III has stripped the play down to essentially just the text itself, disposing of anything resembling a traditional set and all but the most essential props. Cummings puts all his trust in the play and his uniformly excellent cast and the results transcend what could be, if given a more traditional “museum piece” re-creative staging, a rather creaky evening. This production focuses on the idea that this is a memory play, setting much of the action behind scrims and placing a haze on what is being seen and remembered. And what is being remembered is the difficult relationship of Cora and Rubin Flood and the effects this has on their children Reenie and Sonny. While homosexuality is never mentioned, the coded signals are there in the character of Sonny: the over-baring mother, the distant father, the “outsider” status among the other children and his love of movies and movie stars. As Sonny, the very young Jack Tartaglia gives a very respectable performance, but the real treat of the evening is Michele Pawk as Aunt Lottie – it's a juicy part and Pawk doesn't miss one opportunity to shine. If there is one downside to the production it is that the deliberately tableau-like blocking doesn't vary, making for a restrained climax – but that's actually a minor quibble in such an outstanding evening.

For Tickets and Info: www.transportgroup.org
Posted by Ludlow Lad at 8:21 AM No comments: 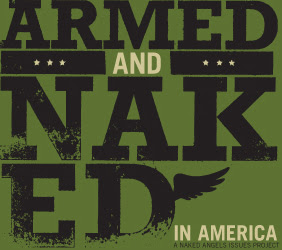 Armed and Naked in America consists of 14 established and emerging playwrights' sometimes scathing, sometimes funny, always insightful responses to life during wartime America, presented together on one stage. Week 1 features a bill of eight plays by distinguished playwrights, including Betty Shamieh, Theresa Rebeck (The Scene), as well as Academy Award-nominated Jose Rivera (The Motorcycle Diaries) and Itamar Moses (Bach at Leipzig). Week 2 features six different plays and playwrights, including Tony and Drama Desk winner David Rabe (Hurlyburly), Tony Award winner Warren Leight (Side Man), Will Eno (Thom Pain), and Pippin Parker. Short videos by some of the city's hottest sketch comedy groups, music performances, and special guests from the worlds of politics, media and entertainment will also complement the performances.

For Tickets & Info: www.dukeon42.org
Posted by Ludlow Lad at 1:05 PM No comments:

The currect issue of Time Out New York, it's Spring Theater Preview Issue, has a section on “20 Dirty Secrets about NY Theater.” #3 is “Beware the blogotainmercial” and states:

“You know that clever theater blog you bookmarked, the one with inside dope on the edgiest shows and artists? Be careful—it might be a PR tool. Marketing departments have offered drama bloggers free seats to write about hipster-skewing plays such as Pig Farm and Dying City. Mind you, theaters don’t demand positive write-ups; they just want the cool-kid buzz. Blogs to trust: George Hunka’s Superfluities, Isaac Butler’s Parabasis and Jaime’s Surplus.”

Now, theater “critics” are given free tickets to review shows all the time. Might that be a PR tool in the hopes of getting a good review and in turn sell more tickets? Say it isn't so! Why is it if bloggers are given free tickets it's morally reprehensible? Establishment Media is scared shitless all the time. First it was the internet. And now that most of them have an on-line presence, along come the bloggs to have them shaking-n-baking all over again. TONY's white list of approved bloggers all are great bloggs. I read them daily. Several of them are also extensions of Establishment Media. So beware that...

Don't miss the opportunity to see this excellent production of this great play.

There are discount offers for the show, so please take advantage of them:

For tickets go to: www.broadwayoffers.com and use the codes above.

Posted by Ludlow Lad at 2:07 PM No comments:

Here they are...I didn't realize it had been such a dull year Off-Broadway...

The Wooster Group Goes To The Opera 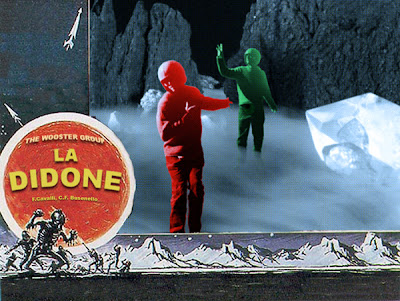 Up next for the fabulous Wooster Group will be LA DIDONE in which Francisco Cavalli's 1641 opera, La Didone, in which Aeneas, prince of Troy, lands on the shores of Africa after a violent sea storm and falls in love with Dido, queen of Carthage collides with Mario Bava's 1965 cult movie Terrore nello spazio (better know as Planet of the Vampires in the US), the spaceship Argos crashes on the planet Aurora, and its crew becomes locked in a desperate battle with zombies!