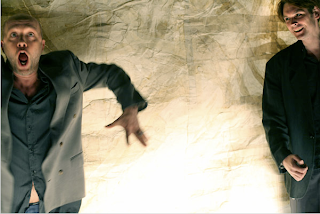 It's somewhat comforting, and a little depressing, to know that actor-centric theater companies in Europe are no better than their American counterparts (despite the tons more funding they receive). Take Dood Paard, from Amsterdam, for example, now performing medEia at PS122. With a text by its three actors (!), medEia is a retelling of the Medea myth, complete with modern song lyrics and slides. All of this may be terribly exciting to the three performers involved, but for the one-hundred plus spectators it is far less so. The credits in the program are a bit confusing, too. In the program it says “created by” Kuno Bakker, Manja Topper, Oscar van Woensel [the three performers],Coen Jongsma [who?], Iwan Van Vlierberghe [one of the two people credited for “lighting and Sound”] & Anne Karin Ten Bosch [who??] - and that seems to be the problem, there is no one single vision and like a lot of theater-by-committee medEia doesn't quite work. 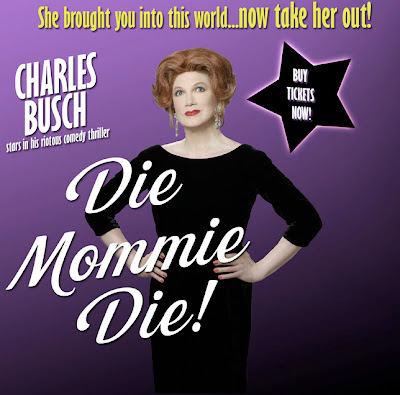 I'm very excited that Charles Busch is returning in the NYC premiere of his play Die Mommie Die.

Tickets are on sale now!
For info: www.dmdtheplay.com
For Tickets: www.telecharge.com
Posted by Ludlow Lad at 7:59 AM No comments: 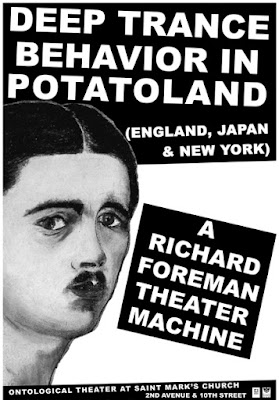 I just found the poster for next year's Richard Foreman production, DEEP TRANCE BEHAVIOR IN POTATOLAND on the Ontological website!
Posted by Ludlow Lad at 10:10 AM No comments: 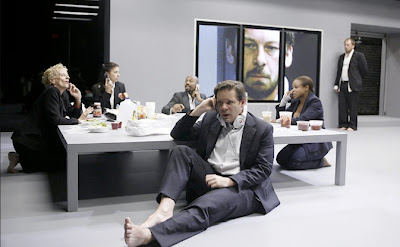 When a bunch of actors arrive on Jan Versweyveld’ stark set carrying armfuls of food I knew we were in for something, but even the V-8 on Elizabeth Marvel in Ivo van Hove’s production of Hedda Gabler a few seasons ago couldn’t prepare one for the onslaught to follow in his new production of The Misanthrope. Van Hove focuses on the characters inner torment in this brutally-physical and smartly-disgusting new production of the Molière play. Live video feed of upstage moments, backstage goings on and even East 4th Street arguments add to the visceral enjoyment of the show. The game cast, including Bill Camp, Joan MacIntosh, Alfredo Narciso, Thomas Jay Ryan, Quincy Tyler Bernstine and especially Jeanine Serrales are all excellent. This is “directors theater” in it most extreme: a unique reading of a classic text, use of multi-media devices, anachronistic props and costumes, and an unusual physicality and I'm certain it's not to everyone's taste. But I'll take this production of The Misanthrope over your typical “museum” reproduction any day!

*above photo by Rahav Segev for The New York Times
Posted by Ludlow Lad at 8:01 PM No comments:

Beginning this season with PHILOKTETES all tickets for Sunday Evening performances at Soho Rep are just $.99.

PHILOKTETES is John Jesurun’s adaptation (written, designed and directed) of the classic myth and it stars the brilliant Christopher McCann! Worth seeing at full price, this is a crime to miss for under one dollar!

For Tickets: www.smarttix.com
Posted by Ludlow Lad at 6:56 PM No comments: 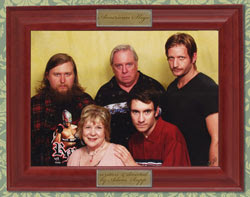 Adam Rapp is certainly this generation’s Sam Shephard; they share certain “American” obsessions. Rapp’s new play, American Sligo, is an excellent absurdist take on the American family. It could be Rapp’s Buried Child. A major asset of the production is Marylouise Burke, an American treasure in her own right. She fits right into Rapp’s ensemble of rep players: Guy Boyd, Michael Chernis, Matthew Stadelmann and the amazing Paul Sparks. I’m sure the play won’t be to everyone’s taste, but I thought American Sligo was a fresh, funny and dangerous new work from one of our best contemporary playwrights.

For Info: www.rattlestick.org
For Tickets: www.smarttix.com
Posted by Ludlow Lad at 10:22 PM No comments:

Theresa Rebeck's new play, Mauritius, begins with one of those awful stage-y beginnings that made we weary of everything that followed; a girl (Alison Pill) walks on stage and begins babbling to another character on stage (Dylan Baker) that isn’t listening and continues talking and talking. It’s not that I’m a stickler for naturalism, but this kind of device is used so often and it has to be the least realistic situation ever created for the stage. While there is some good stuff in Mauritius, most notably Bobby Cannavale, I just found the entire show as convoluted as its beginning moments.

The premise, two estranged siblings come together after the death of their dad, isn't very original; I kept thinking this was Proof without the math. But there is something in the relationship of this brother and sister, and the relationship they had with their father that is completely real and very engaging. Simplicity and honesty are the two best assets of the script. Corey Patrick (who is also the author) and Cass Bugge couldn't be better as the wounded siblings and they are the two best assets of this production. bombs in your mouth is one of the few shows to get a few extra performances as part of the Fringe Encores Series and I'm glad I got to see it.

For Tickets & Info: www.fringenyc-encoreseries.com
Posted by Ludlow Lad at 11:22 PM No comments: 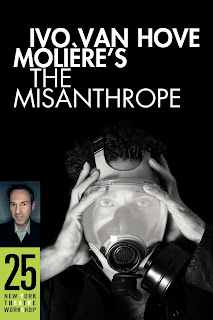 Certain to be the most talked-about show of the fall, Ivo van Hove's production of The Misanthrope promises "a fresh, modern perspective - viewing Moliere's text through the lens of our society in which the traditional social fabric has frayed and virtual relationships can be deleted with the simple push of a button." As someone who still regrets missing his Streetcar and loved every minute of his Hedda, I wouldn't think of missing The Misanthrope - you shouldn't either.

To entice you, here's a discount code to save $20 on tickets:

*Tickets for all performances September 14 – November 11 are just $45 each (reg. $65). In order receive this discount, tickets must be ordered by September 24.

For More Info: www.nytw.org
Posted by Ludlow Lad at 9:20 PM No comments: