If previous Parks plays (Americana Absurdum, Goner and Suspicious Package) are any indication - The Invitation should be hilarious!

THE INVITATION
September 5 - 27, Weds. - Sat. with additional performances September 7 & 8.
All performances are at 8pm.
The Ohio Theater
66 Wooster Street
(between Spring & Broome Streets)
Tickets: $18
available at www.smarttix.com
Posted by Ludlow Lad at 9:23 PM No comments: 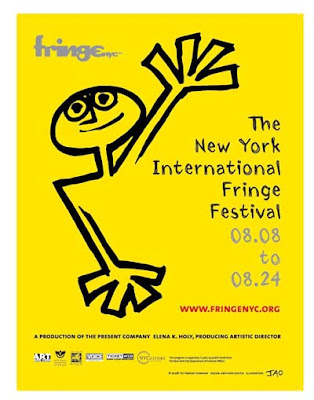 Tickets to the 2008 New York International Fringe Festival are now on sale!
Go to www.fringenyc.org for the full schedule and to buy tickets!
Posted by Ludlow Lad at 5:40 AM No comments:

It was announced today that Collective:Unconscious would be closing it's doors for good at the end of July when it's current lease expires. Founded in 1995 and originally located on Ludlow Street, for the last several years C:U has called 279 Church Street home. As noted below, Charlie Victor Romeo, C:U's most famous alumni show was being restaged as part of the undergroundzero festival and will fittingly be it's final tenant. Other shows that are part of the festival will be staged at The Flea and Manhattan Children's Theater, both neighbors in Tribecca.

It was not stated whether Collective:Unconscious would be searching for a new space.
Posted by Ludlow Lad at 9:19 PM No comments: