Watch the video (below) and then get your tickets quickly...

For Tickets & Info: Click Here
Posted by Ludlow Lad at 6:41 PM No comments: 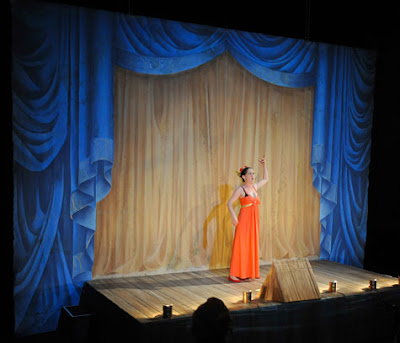 Anyone who knows Ludlow Lad knows how much he loves Nature Theater of Oklahoma. So a new show by Pavol Liksa and Kelly Copper is a cause for celebration! Romeo and Juliet will be performed at The Kitchen and is described as follows:

"This one-of-a-kind performance is the result of a series of phone calls to people who were asked to tell, in their own words, the story of Romeo and Juliet from beginning to end. With some rather surprising twists and turns given that no one seems to exactly remember the plot, the myriad versions of the story compound in an array of competing scenarios as the participants try to invent themselves out of their own narrative blind alleys. Where memory fails, a kind of necessary creativity steps in to fill the void. What we are left with is a highly personal and original series of Romeos, infused with emotion and thoughts about love, need, and the complex nature of self-sacrifice."

While Melissa James Gibson's new play, THIS, at Playwrights Horizons doesn't have the avant-garde bravura of her two previous offerings in NYC, [sic] and Suitcase it still is a brave and important new American play. How it will be received by the press and the theater-going public is anyone's guess. Playwrights grow and mature, but so do audiences. Would, for example, Suitcase, be a breakout success today? Was this playwright just "ahead of her time"? Has she matured or acquiesced? Only time and the NY Times will tell, I guess.

THIS is the story of four long-time friends (and a hot French doctor). Jane has lost her husband and Marrell and Tom have a newborn that doesn't sleep for longer than fifteen minutes at a time and Alan just wants to "do good". The production is comfortably directed by long-time collaborator, Daniel Aukin and the cast works about as well together as a five person juggling team. Jane was originally to be played by Parker Posey, but I can't imagine this play without Juliane Nicholson whose simple, understated performance draws you in all the more. Gibson's writing is smart and intricate and the play is wise and funny. Don't miss it.

THIS
Now - December 13th
Playwrights Horizons - Mainstage
For Tickets & Info: Click Here
Posted by Ludlow Lad at 12:23 AM No comments: 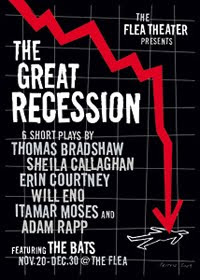 Someone was recently lamenting, on All That Chat I believe, the lack of political/sociopolitical plays, specifically about the economic meltdown. Well, as if on cue, The Flea Theater is presenting an evening of short plays entitled The Great Recession. Six plays in total written by six of THE HOTTEST playwrights working. This is something that is most likely not to be missed!

UNUM by Will Eno.
Directed by Jim Simpson.

For Tickets & Info: www.theflea.org
Posted by Ludlow Lad at 4:20 PM No comments: 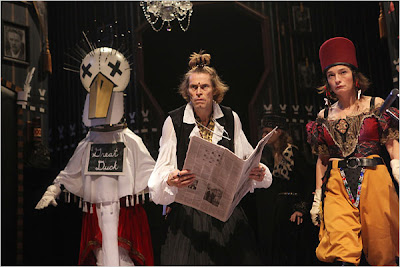 Resist the urge to analyze. Don't read personal information into the performance. Just let the show happen. With every Richard Foreman show I've seen, which is all of them in NYC since I've Got The Shakes, these are the things a keep telling myself. Idiot Savant is no different, or is it? For one thing, Idiot Savant is being performed at The Public Theater as opposed to his own, much smaller space at St. Mark's Church. For another thing, it stars Willem Defoe. It also has an actual lighting designer credited (other than Foreman himself) and the lighting is striking. And probably most importantly, it has been reported that Idiot Savant will be Richard Foreman's final stage production. So I admit that in the back of my mind, I was viewing Savant as a swan song of sorts. Is the giant duck Foreman himself saying "Goodbye"? 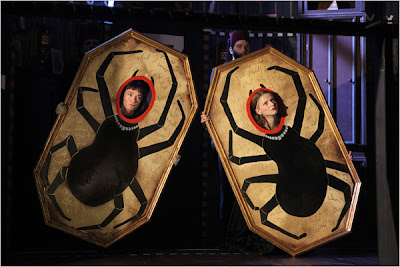 And yet there are an awful lot of familiar Foremanisms here too: the slapstick crashing into walls, the strings dividing audience and performers, the actors use of head mics, Foreman's own distorted voice-overs, the strange props. Idiot Savant is also closer to his shows of a few years ago, before he started to use video projections of pieces filmed is other countries - ironically enough he started using these video segments at the time of his last retirement musings. What Idiot Savant has that his most recent shows didn't was a leading performer/character and this is a welcome return. 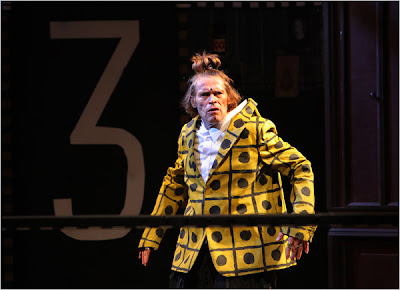 So where does that leave us? I've always found looking at what is different from year-to-year in Foreman's shows far more telling and interesting than looking at the similarities. I loved the beginning of Idiot Savant, with Foreman listing all of the props that would be used during the course of the performance. I loved Elina Lowensohn's entrance (I won't spoil it). Was this Foreman's last theater piece? I'd hate to think so, but maybe. And lastly, is it OK to be asking questions during a Foreman show - maybe - but don't settle on any firm answers - and that's OK, too.

IDIOT SAVANT just extended and will run through December 20th.

For Tickets & Info: www.publictheater.org
Posted by Ludlow Lad at 8:39 PM No comments: