The 2009 Fringe Encore Series has announced the shows that will get a second chance to wow NYC audiences. The Encore performances will take place at Soho Playhouse and Actor's Playhouse. For tickets and more info go to www.fringenyc-encoreseries.com.

A Contemporary American's Guide to a Successful Marriage

AND SOPHIE COMES TOO

Sex and the Holy Land

Notes on the Land of Earthquake & Fire

The K of D, an urban legend

DEVIL BOYS FROM BEYOND

Tales From The Tunnel

Willy Nilly: A Musical Exploitation of the Most Far-Out Cult Murders of the Psychedelic Era

Outstanding Costume Design:
Lisa Zinni - A Contemporary American's Guide to a Successful Marriage
Luke Brown - The Doctor and the Devils

Outstanding Ensemble:
Two on the Aisle, Three in the Van
Powerhouse
Ether Steeds
Bargains and Blood (How To Succeed in Home Shopping!)

Posted by Ludlow Lad at 8:10 PM No comments:

What's Left of the Provincetown Playhouse 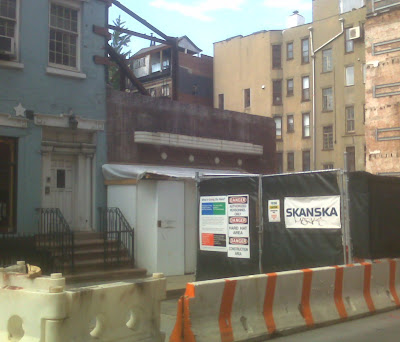 This is all that remains of the historic Provincetown Playhouse on MacDougal Street. The facade of the once home of the Provincetown Players is all that still stands. I guess we should be lucky that NYU will preserve the facade of this historic site, but Ludlow is still outraged that this supposed institution of learning is turning Greenwich Village into a collection of ugly dorms and undistinguished buildings.
Posted by Ludlow Lad at 7:38 PM 2 comments:

With the 2009 Fringe at the half-way point, here are the shows I can personally recommend: 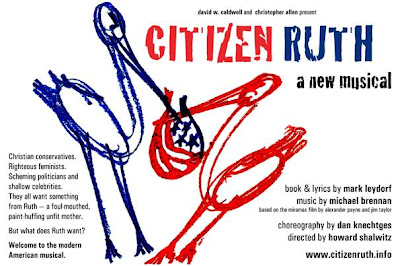 Ludlow really enjoyed Citizen Ruth. It’s always been a favorite film and the music is, for the most part, very good. Knowing the film, it’s hard not to miss Laura Dern’s terrific performance – but Garrett Long does more than an honorable job. Annie Golden, Janet Dickinson and Sherri L. Edelen are all excellent and it is staged so tightly (by Howard Shalwitz) that the evening just flies by! This isn’t the last we’ll be hearing about this show.

Ludlow couldn’t help but be struck by the line of ticket holders stretching to MacDougal Street. When was the last time anything at the Minitta Lane Theatre had a line stretching down the block to get in? What is generating that much interest; is it that it’s a Fringe Show? Is it the $15 ticket price? Similarly, the line was almost as long for VOTE! on Friday night. Is it that there are only a handful of performances to catch? Are people hoping to catch “the next big thing” or taking advantage of a bargain. I’m not sure, but how can someone capture this excitement and use it again in say, October?
Posted by Ludlow Lad at 2:49 PM No comments:

First Foto: Bacchae In The Park With Groff 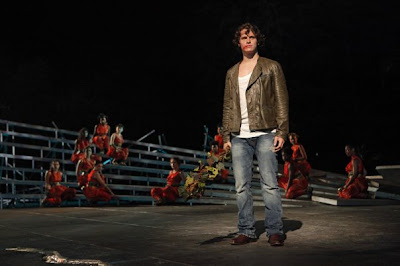 Here is the first foto of THE BACCHAE with Jonathan Groff as Dyonisus; directed by Joanne Akalaitis. Photo by Joan Marcus from The Public's Facebook page.
Posted by Ludlow Lad at 5:10 PM No comments: 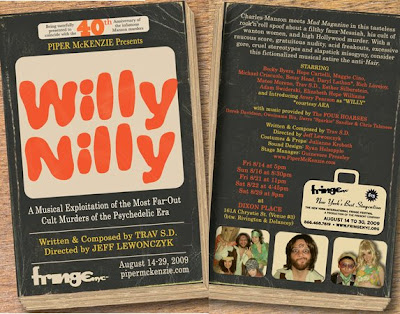 For Tickets & Info: www.pipermckenzie.com or www.fringenyc.org
Posted by Ludlow Lad at 8:00 PM No comments: