I’ve seen Laura Esterman in a number of plays in the last couple of years and while none of the productions were entirely successfully I wouldn’t trade the opportunity of seeing her perform in them for anything. She makes you want to watch her at every moment; her choices are never short of fascinating. Add Gip Hoppe’s Mercy on the Doorstep to the pile of not entirely successful plays Esterman has done lately. The play pits Esterman’s alcoholic Corrine against very under-stated Jenn Harris as her born-again stepdaughter and her preacher husband, Mark Rosenthal. The play is rather predictable and oddly structured in lots of short, choppy scenes – but any chance to see the wonderful Laura Esterman is well worth a visit.

For info: www.theflea.org
Posted by Ludlow Lad at 10:12 PM No comments:

Lisa Kron’s Well is a solo performance with a cast of six. It deals with the nature of illness and health by way of Kron’s mother, who is a character on stage, hilariously played by Jayne Houdyshell. Mom is constantly interrupting Lisa’s telling of their story – she corrects, points out factual omissions and offers the audiences snacks and beverages. Well is as interesting and complicated as it is funny. Its Pirandello-like structure brilliantly plays with the idea of what truth is and how we selectively choose memories to validate our personal version of truth. I was curious how it would play in a Broadway house, but it is as comfortable a fit as Mom’s la-z-boy recliner.

For Info: www.WellOnBroadway.com
Posted by Ludlow Lad at 10:15 PM No comments:

The great thing about seeing a theater piece directed by Pavol Liska is that you never know what to expect. You go in to a work directed by Richard Foreman or Robert Wilson or Richard Maxwell with certain expatiations that are always fulfilled and while the work of those directors is respectable it does lack the element of surprise. Fragment is an assemblage of text fragments from the works of Sophocles and Euripides. As put together by Kelly Copper, these ancient passages are wonderfully relevant in our time of war and terrorism. Liska’s three actors debate these contemporary issues in modern dress while moving between two less-than-bountiful catering tables (one on either end of the playing area), which are themselves between the two sections of the audience, each facing the other. Of the three actors, long-time Liska collaborator Zachary Oberzan, works best within the framework of the conceit and best manages a necessary ease with the language. While Fragment may not be Pavol Liska best executed work, it is daring, challenging, adult work of theater.

For information: www.classicstage.org
Posted by Ludlow Lad at 10:50 PM No comments:

The property known as The Property Known as Garland will most likely be condemned in short order, so if you are curious – you better hurry. Less a play then a reheated collection of leftover Judy Garland clichés, it presents itself as fictional account of the hour in her dressing room before her final concert in March of 1969. The show marks the return of Adrienne Barbeau to the NYC stage for the first time since her Tony nominated performance as Rizzo in Grease and the fact that she escapes with her dignity after the 80 minutes of this show is deserving of an award in itself. If Barbeau rarely strikes a false note in the course of this Property it is probably because she never strikes more than one; but Barbeau is only to blame to the extent that she is married to the author.

For info: www.propertyknownasgarland.com
Posted by Ludlow Lad at 10:25 PM No comments:

Just when you think New York City is the center of the theatrical universe, along comes Not Clown a production from Austin, Texas, by the company Physical Plant, brought to NYC by the invaluable Soho Rep. Not Clown is the subversive, hilarious, political allegory of a time and place where Clowns are outlawed and tortured after the 9-11-like terrorism of “Flop Friday” carried out by head clown, Alfred. I’m sure any similarities to the “war on terror” are purely coincidental. The show is meta-theatrical to the nth degree, expertly directed by Carlos Treviño and preformed in high Clown-Guignol style by the terrific cast of eight, with a special nod to Lee Eddy as Agnes. It’s a shame it’s only here for 7 performances, because this show deserves to be seen.

For Info: Soho Rep and Physical Plant
Posted by Ludlow Lad at 6:24 AM No comments:

The Wooster Group’s dazzling production of The Emperor Jones is back and anyone who likes theater would be a fool to miss it. Kate Valk’s performance as Brutus Jones is the most technically amazing and powerful performance one is likely to see. Her delivery of O’Neill’s pejorative southern/black language makes no apologies; in fact she dives in head first and fearlessly resonates every “dey” “dem” “sho” and “mo” so much so that it becomes hypnotic. It says a lot that Willem Dafoe (Smithers in previous versions of the production) is hardly missed at all. The role of Smithers, relegated to the edge of the set for most of the show, is now played alternately by Ari Fliakos and Scott Shepherd (Shepherd at the performance I saw) but this is very much Valk’s show. The soundscape of the production (Sound Design by John Collins and Geoff Abbas and Music Composition by David Linton) fits perfectly and seamlessly within Elizabeth LeCompte's tight, tight direction.

For Info: The Wooster Group
Posted by Ludlow Lad at 11:02 PM No comments:

Coming Soon: Landscape of the Body at Signature Theatre

The best theater deal in NYC has to be the current (and next) season of the Signature Theatre Company. Time Warner has sponsored this and next season making it possible for Signature to offer all tickets for $15. First off this season was Horton Foote’s The Trip to Bountiful and up next is John Guare’s Landscape of the Body. Guare’s play will be directed by Michael Greif and will star Sherie Rene Scott and Lili Taylor. At $15 tickets will, I’m sure, go fast.

For info: Signature Theatre
Posted by Ludlow Lad at 2:55 PM No comments:

I’m not sure how much there is to say about a musical about the writing of a musical. The title of the show is [title of show]. It’s completely self-conscious and often funny, but in a world of reality tv and a world in which everything self-referencing it’s about as original as the 17th season of MTV’s The Real World. The most surprising thing is that a show about submitting a show to the New York Musical Theater Festival was produced in only the second year of the festival! The music is simple and inoffensive and the performances are all fine, I’m just not sure what it’s creators want us to take from it?

For Info: Vineyard Theatre
Posted by Ludlow Lad at 10:43 PM No comments: 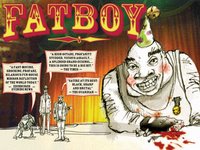 It was very weird to see John Clancy's Fatboy on the day that Slobodan Milosevic was found dead in his prison cell. In act two, Fatboy is on trial for his own crimes against humanity and he is the embodiment of all the superstars of evil: Hitler, Milosevic, George W. Bush, and in effect you and me as bystanders. You see Fatboy is a new take on Alfred Jarry’s Ubu Roi and it is a truly wonderful extremely tight hour and twenty minutes of raunchy, brilliant theater. John Clancy makes me rethink my rule that authors shouldn’t direct their own work because you couldn’t ask for a better production or cast, with special kudos to Nancy Walsh as Fatboy’s wife Fudgie and the ever hilarious David Calvitto as the Judge. This is really a must-see.

For Info: http://www.sohothinktank.org
Posted by Ludlow Lad at 2:11 AM No comments:

Here’s a tip for anyone seeing David Grimm’s Measure For Pleasure at the Public Theatre – don’t leave after the first scene, no matter how much you may want to. It gets better – much better actually. But you wouldn’t know that by the end of the first scene. I saw at least a quarter of the audience tune out after that first scene, which is a shame as for much of what follows, is very good. For one thing, in the first scene you’ve seen the weakest writing of the evening, and the two weakest actors in an otherwise excellent cast. You haven’t seen the charming Euan Morton, the glowing Emily Swallow, or the powerful Suzanne Bertish. And really, you’ve only seen the incredible Michael Stuhlbarg in a lame prologue. It’s a very worthwhile play up until the messy climax. I think much of the blame should go to the director, who manages to screw up the end of every scene. A better director might have been better able to aid this script instead of managing to sink to the occasion.
Posted by Ludlow Lad at 12:09 AM No comments: