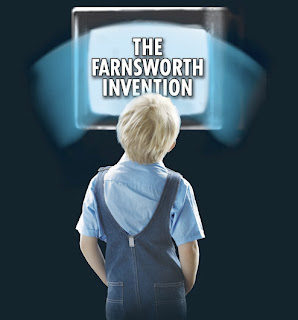 Aaron Sorkin's The Farnsworth Invention is a big play: big cast, big ideas all packed into a very tight two hours and fifteen minutes. The play concerns the the race to invent and patent the first practical, working television. In this corner we have Philo T. Farnsworth, a young self-taught genius from the Midwest, and in the other corner we have David Sarnoff, visionary media mogul in search of a medium. Sorkin's play is a wild-ride of a history lesson of what was, what wasn't and what could of been regarding radio and television in the first half of the 20th century. While the fist act gets a little too bogged down in "this-is-what-happened-next" mode, act two really soars. Hank Azaria is amazing as Sarnoff and Jimmi Simpson is outstanding as Farnsworth. The Farnsworth Invention is well worth a trip uptown. 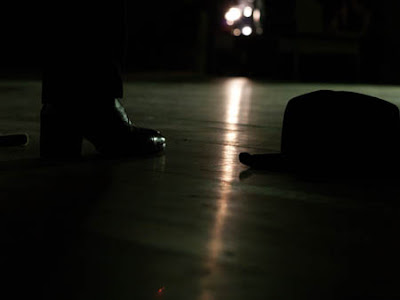 A new show by Richard Maxwell begins performances this week at The Performing Garage.
It's called Ode to the Man Who Kneels. A Western.

For Info & Reservations: www.nycplayers.org
Posted by Ludlow Lad at 8:23 PM No comments: 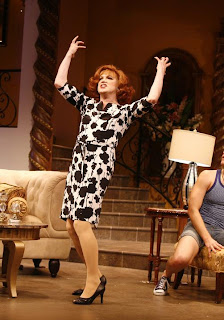 Seeing Charles Busch on stage in one of his plays is always a treat. As Angela Arden, in Die Mommie Die, he's Bette Davis, Joan Crawford, Eve Arden and about a half-dozen other screen stars wrapped up in one performance. And that's Busch's art – he doesn't just act a role, he portrays a famous a film actress acting a role. And he does it wonderfully – the deep vocal inflections, the posed stances, the stylized strutting across the stage are almost kabuki-like in their use, signaling certain emotions with the accuracy of an “Applause” sign being lit. To say the rest of the cast isn't on Busch's level would be an understatement – they just ain't got it. But to compare them almost isn't fair; Busch has spent a whole career honing these skills. The production would have been better served had director Carl Andress taken another approach with the other cast members, who by the way are not untalented – they include the amazing Kristine Nielsen! When Busch isn't on stage, it is a drag (pun intended) but thankfully he is on stage for much of the evening – and when he isn't you know is changing costumes! I would never miss a chance to see Charles Busch, I only wish it weren't so long in between his stints in New York.

For tickets & Info: www.dmdtheplay.com
Posted by Ludlow Lad at 8:37 AM No comments: 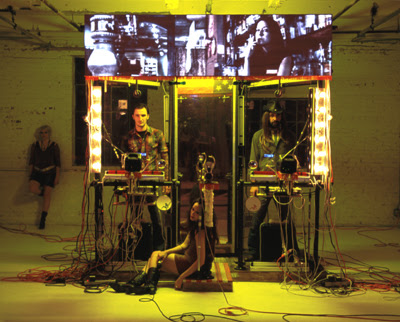 For me, a show by Temporary Distortion is not about what is being told but how it is being told. I'd be hard pressed to tell you the “plot” of some of their previous shows, but the mood, images, technical devices and aural surroundings are what sticks. With Welcome to Nowhere (Bullet Hole Road), TD has really expanded their use of video and it has really taken their shows to a new level. The video sequences in Welcome To Nowhere, by William Cusick (projected above the installation-like structure in which the live actors perform) are so beautifully shot they put most major films to shame. Artistic Director Kenneth Collins has once again created a terrifically atmospheric piece and assembled a group of game actors to participate, most notably Stacey Collins, Brian Greer and Lorraine Mattox. Don't miss Temporary Distortion's next show.

For Info: www.temporarydistortion.com
Posted by Ludlow Lad at 4:34 PM No comments: 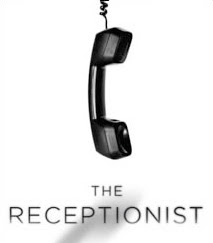 Adam Bock's new play The Receptionist could be subtitled “The Banality of Evil.” It's set mostly in the reception area of the Northeast Office an unnamed company at which Beverly answers phones, cleans her work area, makes coffee and guards the office supplies. Beverly is played with hilarious gusto by the talented Jayne Houdyshell and her exchanges with her co-worker, Lorraine (Kendra Kassebaum), are familiarly funny to anyone with a “day-job”. But the endless banks of Manila file folders and an unexpected visitor from the Central Office signal something is not quite right. While The Receptionist is not quite the rich experience that Bock's previous play, The Thugs, was – it is definitely enjoyable, thought-provoking and packs a punch. Joe Mantello directs with much skill and style. Kudos to Manhattan Theatre Club for taking a chance with this one!

For Tickets & Info: www.mtc-nyc.org
Posted by Ludlow Lad at 11:11 PM No comments: 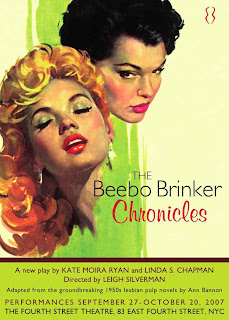 Adapted from the novels of Ann Bannon by Kate Moira Ryan & Linda S. Chapman, The Beebo Brinker Chronicles is an instant classic. Leigh Silverman directs so flawlessly that it's a crime she's not directing more often (note to the “old boys club” producers – time to break the glass ceiling with regard to female directors); Silverman should be at the top of everyone's director wish-list. As Beebo, Anna Foss Wilson gives an amazing, self-assured performance. David Greenspan, as always, is a wonder to watch and Carolyn Baeumler, in a number of small roles, steals every scene she's in! Hourglass Group deserves three cheers for this fabulous production and the smarts and courage to recognize the gap that his show fills in lesbian representation. And it payed off nicely - the show has already been extended and I would not be surprised if it has a future life. 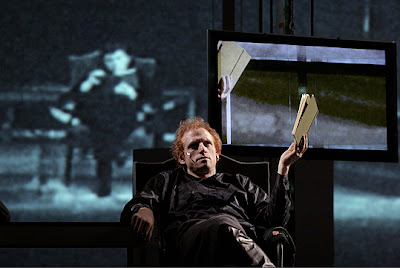 Back for it's official run after a brief stint at St. Ann's Warehouse earlier this year The Wooster Group's HAMLET is a must-see. Now performing at The Public's Newman Theater (why does the public make such a secret out of which venue a show is in?), the Wooster Group's re-construction of the 1964 Richard Burton telecast of Hamlet is a thrill to watch. It hasn't changed drastically from early this year. This is still Scott Shedhard's show and he runs with it. Kate Valk is wonderful as always (as both Gertrude and Ophilia). A new revelation for me this time was how great Ari Fliakos was as Claudius and a number of other roles. Casey Spooner's Laertes song is terrific as is the entire sound design. I wasn't quite sure how The Public's subscribers were feeling about the show and anyone expecting Shakespeare's Hamlet will be disappointed. But anyone looking for something special should get thee to The Public! It's already been extended through December 2nd. 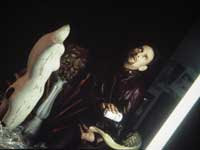 This Saturday, Ela Troyano and Uzi Parnes will talk about Jack Smith's theater and performance work and show film and video of Jack including excerpts from BUBBLE PEOPLE by Troyano and CHANDALIER FASHION SHOW & COCKTAILS WITH JACK by Parnes.

For More Info: www.lamama.org
Posted by Ludlow Lad at 7:25 AM No comments:

Marisa Tomei To Star In New Play By Will Eno 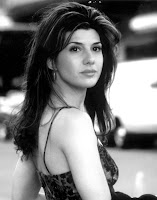 Previews are only $18, but you must be a member of The Flea to purchase them in advance, otherwise they are available one hour prior to each performance on first come, first served basis.

For Tickets and Info (and info on becoming a member): www.theflea.org
Posted by Ludlow Lad at 10:27 AM No comments: 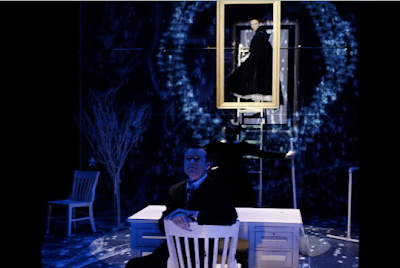 Anne Bogart must think crossing a stage is one of the most interesting of theatrical devices. In Hotel Cassiopeia, people move around the stage of the Harvey Theatre in Brooklyn as if it trying to avoid a ticket for loitering. But this movement falls far short of what you may call choreography and really only once, about 90% into the piece, cumulates in a tableau worthy of it's subject matter, artist Joseph Cornell. For someone with the experience of Ms. Bogart, it's almost shocking that she seems to have no idea how to stage Charles Mee's text. Ultimately, I wonder who the audience is for Hotel Cassiopeia? Or what was being attempted? It's not detailed enough to be educational on the under-known Cornell and if you know anything about Cornell there's really nothing new here. The fabulous biography of the artist, Utopia Parkway, would be a much better way to spend your time.

For Tickets & Info: www.bam.org
Posted by Ludlow Lad at 6:31 AM No comments: 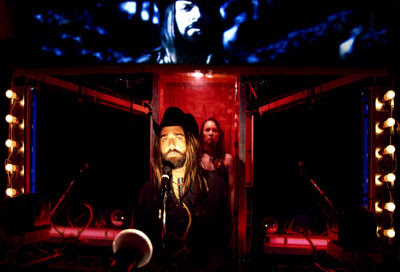 Temporary Distortion is one of my favorite young theater companies. From the press release for their new show:

Welcome to Nowhere (bullet hole road) is a hybrid of stage and cinema. During the performance, a constant stream of video is projected above the cast. In scenes of prolonged silence, stillness and impassivity, doppelgangers of the characters we meet onstage navigate this hyper-real cinematic landscape as if lost in a dream.

While the stage characters' specters float silently above them, the text is spoken live by the actors onstage in a way that mimics accepted cinematic tendencies and references filmic styles of performance. Constantly in "close-up," the performer's softly spoken words are amplified by microphones that riddle the box-like set around them. Underplayed and restrained, these conversations and monologues act as voiceover for the accompanying images above them, while at other times complete scenes are played out solely in the world of the film leaving the live actors silent. This continual juxtaposition of stage and cinema becomes one of compliment, complication and contradiction, suggesting multiple ways of interpreting the dynamics between characters and the incessantly shifting narrative fragments.

Part road movie, part fractured memory, part love story...Welcome to Nowhere (bullet hole road) employs one of Temporary Distortion's claustrophobic boxlike installations to stage the story of a man who is haunted by his past and drifting across America. There is blood across the dashboard, headlights in the rearview mirror and the vague memory of a hitchhiker who may have been a dream.

For Tickets & Info: www.chocolatefactorytheater.org
Posted by Ludlow Lad at 7:20 PM No comments: 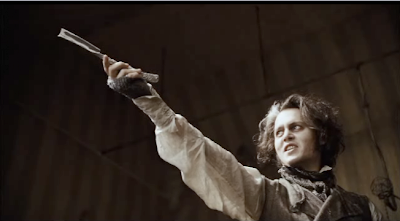 Every Tuesday on Modern Fabulousity, its wonderfully witty author recaps the week in stage news,. It's become required reading for me since I stumbled upon it - as much a Michael Riedel's columns in the Post and Micheal Musto's in the Voice.

But really, I read Mod Fab every day, just because I dig their taste and sense of humor and dislike of Kevin Kline.

Heads Up: Joe E. Jeffreys and The Basement Up the Block: The 82 Club and Beyond 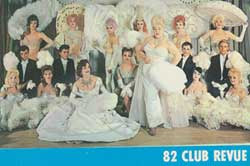 LaMama's Coffeehouse Chronicles continues this Saturday, October 6th at 3pm with Joe E. Jeffreys and The Basement Up the Block: The 82 Club and Beyond, a discussion of the 82 Club that will incorporates hundreds of photos as well as numerous audio and video clips as it explores the history and social significance of the space as well as its relation to La Mama.

Sauturday, October 6th at 3pm
"The Club" at LaMama
74A East 4th Street
Admission: Free (but they "do pass the hat keeping with tradition")
For Info: www.lamama.org

October 20th: Uzi Parnes and Ela Troyano will do a show on Jack Smith
November 3rd: The works of Leonard Melfi
November 17th: Ronald and Harvel Tavel discuss the founding of the Theatre of The Ridiculous
Posted by Ludlow Lad at 7:42 AM 1 comment: