For Tickets: Click Here
Posted by Ludlow Lad at 5:06 PM No comments:

1. Soho Rep: Some of my most favorite theater experiences have been at Soho Rep. Such great productions as Mac Wellman’s Dracula and Swoop, Len Jenkin’s Careless Love and Dark Ride, Wendy MacLeod’s The House of Yes, Melissa James Gibson’s [sic] and Suitcase, Madelyn Kent’s Peninsula and most recently The Thugs by Adam Bock make Soho Rep my personal favorite theater company in nyc . Julian Webber and Daniel Aukin were both excellent Artistic Directors – here’s wishing the best to new Artistic Director Sarah Benson.

2. Richard Foreman: Pretty much annually since 1968, Richard Foreman has been creating his unique, smart, intellectual works for the stage. It wouldn’t seem like January without a new work from Foreman. I've seen everything he's done since I've Got The Shakes, often numerous times, and wouldn't dream of missing one.

3. Wooster Group: Elizabeth LeCompte, Kate Valk and the other artists of The Wooster Group have created some of the most innovative works of theater you could ever wish to see. Precisely executed and superbly designed pieces that are unforgettable.

4. Pavol Liska: Pavol Liska is certainly at the forefront of the next generation of GREAT theater artists in the tradition of Richard Foreman and The Wooster Group. I was hooked on Liska from the very first piece of his a saw, Train Station – presented as part of the Ontological-Hysteric Theatre’s Blueprint Series – and have seen almost everything he has done since. He is finally starting to get the wide recognition he deserves.

5. NYTheatre.com: NYTheater.com just celebrated their 10th anniversary. I love Martin Denton’s mission to support emerging theater artists by covering work that may otherwise go without any media coverage. It is one of the sites I check on a daily basis, often just to browse what is currently happening or what will be coming soon off-off Broadway.

7. OBIE Awards – Awards without nominations alone makes the OBIE Awards special. Looking over a list of past OBIE winners is incredible ; it’s like a who’s who of everyone important in NYC theater.

8. Michael Feingold – Michael Feingold is the smartest theater critic currently working. I feel as though I’m smarter myself after reading his essays for the Village Voice. I love how he can review two works that seem completely different and find the unimagined commonalities.

9. PS122 – For over 20 years, PS122 has been the home to NYC most important independent performers and theater companies. From performers like Ethyl Eichelberger and Spaulding Gray to Karen Finley and Tim Miller and companies like Big Art Group, Elevator Repair Service and Radiohole, PS122 has played an important role in the history of alternative theater.

Posted by Ludlow Lad at 8:33 AM No comments:

Astronome: A Night At The Opera 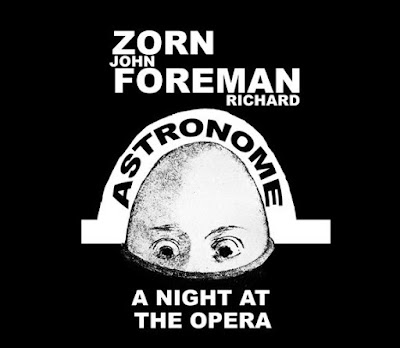 Richard Foreman and John Zorn Join Forces With Astronome: A Night At The Opera

This is the historic first time collaboration for these two MacArthur geniuses who have, individually, challenged, enlightened and entertained adventurous audiences for years. Astronome: A Night At The Opera is a work dominated by ecstatic groans, grunts and babbling, and explores the initiation of a group of people into a world where ambiguous behavior alone leads to freedom--perhaps under the tutelage of the necessary "false messiah."

Richard Foreman and John Zorn's
Astronome: A Night At The Opera
February 5th through April 5th
At The Ontological Theater at St. Mark's Church
131 East 10th Street, NYC
Posted by Ludlow Lad at 11:41 AM 1 comment: 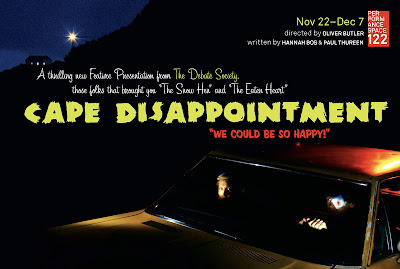 The Debate Society's 4th full-length play transforms the upstairs space at P.S. 122 into their own version of a Drive-In theater to present an intimate and absurd perspective of classic Americana. The Brooklyn based play-makers invite audiences to experience the Feature Presentation from the comfort of their own private 4-seater, equipped with a cooler, speaker box, and a close-up view of the action. With Hannah Bos, Paul Thureen, Michael Cyril Creighton and Pamela Payton-Wright; directed by Oliver Butler.

Posted by Ludlow Lad at 9:01 AM No comments: 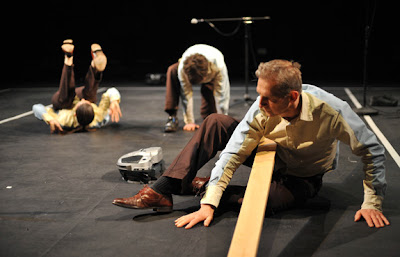 Talking about _________ is like dancing about architecture. Fill in the blank: art, love, etc... but the Chicago collective, Goat Island is actually dancing about architecture in their latest, and final piece The Lastmakers. The 23-minute architectural dance happens relatively early in the evening with also includes a lot of famous "lasts" including those of Lenny Bruce, Emily Brontë, Robert Creeley and Saint Francis. And while the history of the Hagia Sophia in Istanbul (the architecture in question) and the words of Bruce et al are never quite satisfyingly brought together, The Lastmakers is an clever and enjoyable ninety minutes.

For tickets & info: Click Here
Posted by Ludlow Lad at 9:16 PM No comments: 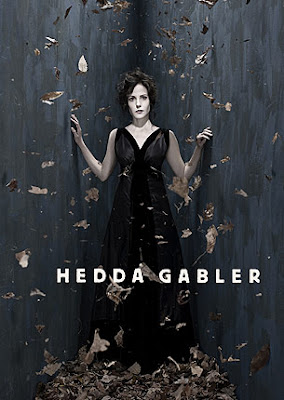 I love Mary-Louise Parker.
I wasn't sure about her being cast as Hedda Gabler (at Roundabout Theater).
But I love this image...so I'm holding out hope.
www.heddaonbroadway.com
Posted by Ludlow Lad at 7:34 AM No comments: