This Week Beyond Broadway: GOLDOR $ MYTHYKA and I AM AN OPERA

Based on a truly true story!  In 2008, playwright Lynn Rosen read an article she couldn’t get out of her head… A nice young couple enamored of fantasy role-playing games, Roger Dillon and Nicole Boyd, steal $7.4 million from an armored car company in Youngstown, Ohio. By the time they’re captured just 350 miles away (in Pipestem, West Virginia), the public has dubbed them the “Goth Bonnie and Clyde.” 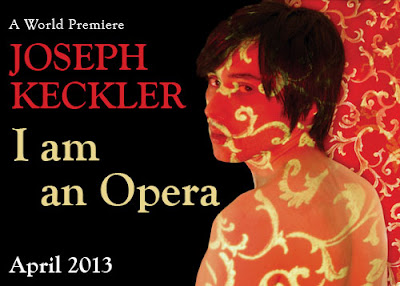 Dixon Place presents
I Am An Opera
Written, Composed and Performed by Joseph Keckler

For Tickets and Info: Click Here
Posted by Ludlow Lad at 2:56 PM No comments:

Discount Tix: ACCORDING TO GOLDMAN (Theater Breaking Through Barriers) 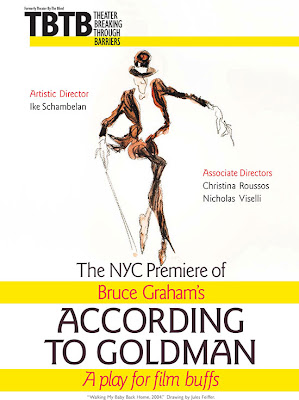 ACCORDING TO GOLDMAN is a fresh, funny and eventually fierce look at screenwriting for Hollywood. By studying a mentoring relationship between an old Hollywood hand and an eager young student, it shows the move of major movies from the elegance and grace of Fred Astaire to the massacres and fireballs of modern flicks.

Since it's inception, 15 years ago, the Soho Rep. Writer/Director Lab has fostered the creation of new work from some of New York's most exciting young and emerging artists. From Jackie Sibblies Drury to David Adjmi, Annie Baker to Branden Jacobs-Jenkins, our Lab members have played an enormous part in the development of the creative life of our theater.

This year's reading series promises to continue that trend with five terrific plays from some of New York's most distinctive new theatrical voices!

THIS IS GONNA BE GREAT
by Anna Greenfield / directed by Mary Birnbaum
Venue: Access Theater, 380 Broadway. April 29th at 7PM

THE NATURE OF THINGS
by Tracy Thorne / directed by Kristan Seemel
Venue: Soho Rep., 46 Walker Street. May 6th at 7PM

Writer/Director Lab will move around a bit this year, so please take note of the various venues. All readings are free and open to the public, first come first served. We look forward to seeing you there!

For more info: Click Here
Posted by Ludlow Lad at 8:05 AM No comments: 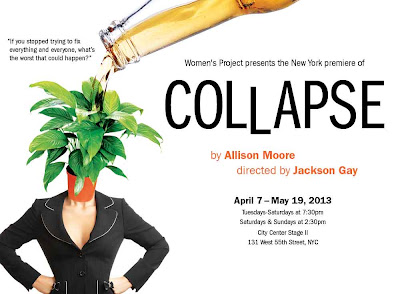 Hanna has it all.  Sort of: a caring husband in control of his panic attacks, a free-spirited sister with a penchant for accidental crime, an exciting career fraught with moral dilemmas, and a drunken house plant.  COLLAPSE is a hilarious and transcendent   odyssey that explores the real and imagined circumstances that push people to the edge.

Film: The Stages of Edward Albee 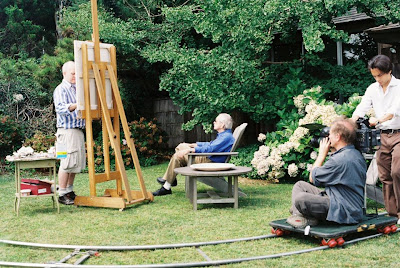 The Paley Center For Media will present the New York premiere of THE STAGES OF EDWARD ALBEE a new documentary exploring the life and work of the muti-award-winning playwright.

Ben Brantley, chief drama critic of the New York Times, has stated that Edward Albee is “without peer among American playwrights,” asking the most basic existential questions. This intimate documentary uncovers the life and artistry of the man who continues to inspire and challenge the Broadway community. Albee is casually captured in his loft amid his extensive art collection, as well as relaxing in his summer home in Montauk. Actors Kathleen Turner, Marian Seldes, Bill Irwin, and Bill Pullman reflect on the challenges of performing Albee’s work, in addition to reading from his plays. Albee’s place in theatrical history is considered by playwrights Tony Kushner, Terrence McNally, and John Guare. The Stages of Edward Albee is engaging and revealing, illuminating the creative process and the impact of one illustrious writer on his colleagues and audience.

Posted by Ludlow Lad at 4:29 PM No comments: 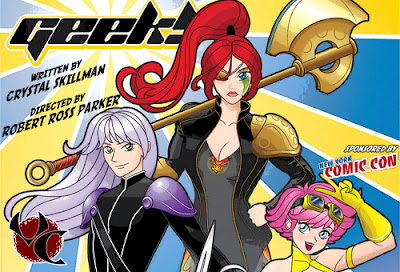 With pissed-off Pikachus, steam punk armies, stood-up Sailor Moons and roller-blading monsters on the prowl, it's easy to get lost in the Inferno-esque anime convention where the fans, the otakus, and the geeks prowl. But to score a rare signature from their comic book idol, teenage outcasts Dayna and Honey will take on obsessive magic players, Jedis and elfs, cosplayers and convention guards - through all nine flights of Ohio's Dante's Fire-Con - to get a chance to shake hands with their pop-culture hero. 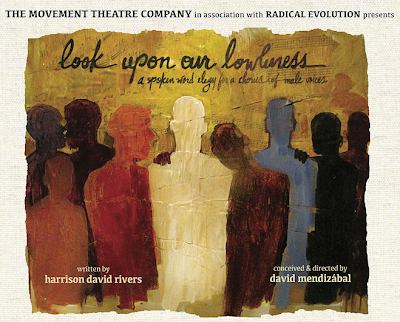 When a young gay man is found dead in his New York apartment, his best friends are left wondering why. Part meditation and part celebration, LOOK UPON OUR LOWLINESS is a touching, unexpectedly funny story of seven men who, in the wake of a tragic loss, choose to embrace life. In a world inundated by technology and constant communication, the play examines the interconnectedness of love, loss, faith, and healing.

On an isolated island, military captain, Edgar, and his ex-actress wife, Alice, approach the 25th anniversary of an intense marriage.  When a jolt from the past arrives in the shape of Alice's cousin Gustav, a deadly battle of wills begins.  And Edgar is prepared to fight to his very last breath…  Strindberg's masterful vivisection of a diabolic union blazed the trail for modern marriage portraits like "Who's Afraid of Virginia Woolf?".  Red Bull Theater brings this modern masterpiece to life in a savagely comic and bracingly intimate production.

When Annie and Peter decide to adopt, they come to set their sights on a child from Africa. But when the reality of this choice sinks in, it opens a well of uncertainty that speaks to their very identity as White Americans. Politically-charged and tack-sharp, The Call is a startling portrait of cultural divide, casting global issues into the heart of an American home. 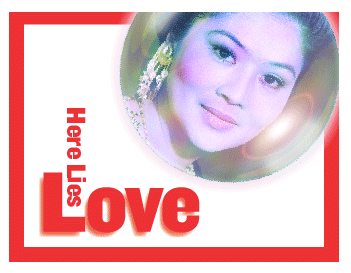 Within a pulsating dance club atmosphere, David Byrne and Fatboy Slim deconstruct the astonishing journey of Filipina First Lady Imelda Marcos retracing her meteoric rise to power and subsequent descent into infamy and disgrace at the end of the People Power Revolution. HERE LIES LOVE is neither a period piece nor a biography, neither a play nor a traditional musical but an immersive theatrical event combining songs influenced by four decades of dance music, adrenaline-fueled choreography, and a remarkable 360-degree scenic and video environment to go beyond Imelda’s near-mythic obsession with shoes and explore the tragic consequences of the abuse of power.

For tickets and info: Click Here
Posted by Ludlow Lad at 2:23 PM No comments: