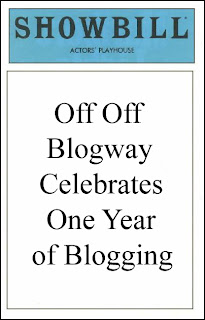 It was one year ago today that I started Off Off Blogway. It was a snowy night and I was on my way home from seeing a show at The Brick Theater in Williamsburg. There were only a three people in the audience, one of which was the guy at from box office. I liked the show and wanted to talk about in a way that would possibly “get the word out”. From there it became a way to put down my thoughts about the shows I see, give a “heads up” about shows that are coming soon, and a way to comment on other media coverage of the theater scene.
Thanks to all that have visited.

Email ThisBlogThis!Share to TwitterShare to FacebookShare to Pinterest
Labels: New, Reviews, Previews off off blogway

As the director of the not-very-well-attended show you say helped inspire this blog, I'm pleased that something bigger came out of that performance. Thanks for coming and for writing it up, and for keeping on at it!