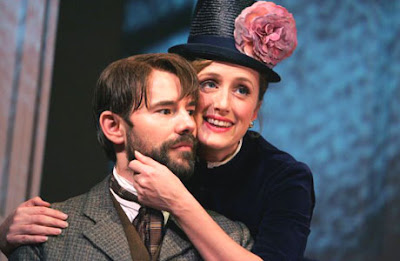 Sunday in the Park with George is not one of my favorite musicals; it always seemed like a good idea rather poorly executed. The Menier Chocolate Factory's production that has just come in to Roundabout's Studio 54 has done nothing to change my overall impression of the piece and a few of their choices have even made matters worse. The show is nicely sung and the small orchestra sounds great. Daniel Evans' act one George is appropriately restrained making for a dramatic shift for his act two George – you hardly believe it is the same actor. Jenna Russell's Dot is sweet and her Marie is lovely. The entire ensemble is fine. This production's big problem for me was it's use of video projections in act one, which undercuts the impact of the new media art that turns up in act two. The second problem I had was with the use of British accents in act one (which is presumably set in France) and the switch to American accents for act two. On the bright side, act two was way more enjoyable then I had remembered it, but when act two outshines act one in this show, that's got to be a sign of trouble! But no doubt the New York critics will eat it up...

For tickets & info: http://sundayintheparkonbroadway.com
Posted by Ludlow Lad at 1:18 AM

The Chromolume is supposed to be a bit lame, that's the point of Gerge's angst in act II. It's his 7th piece in the series at a time when contemporary art has begun to diversify so much that any repetition is considered banal, however technically accomplished it may be. (ah, the early 80's) Even he says he hasn't created anything new.

I completely agree with the off-off blogway original post. I was so thrown by the accents (especially Jenna Russell's as Dot) in Act One, that it just felt like fingernails scraping against the blackboard to me. She appears to be a very lovely actress/singer otherwise, so this is not a mean-spirited comment towards her. Just an oversight in the direction it appears to me. I completely agree with the ultra-amazing projections used throughout the show. They were so amazing, that it took something away from George in the second act. I completely agree with this blog. Also, I thought the orchestrations were fine while seating in the orchestra, but when I went to the balcony/mezzanine the sound was very "tin". The sound design was not blended well for that space with only 5 instruments. All in all...as a friend of mine replied, I guess it's better that to see something that has high aspirations that doesn't quite work, than to see the completely commercial b'way saccharine that's constantly being force fed and revived continously.